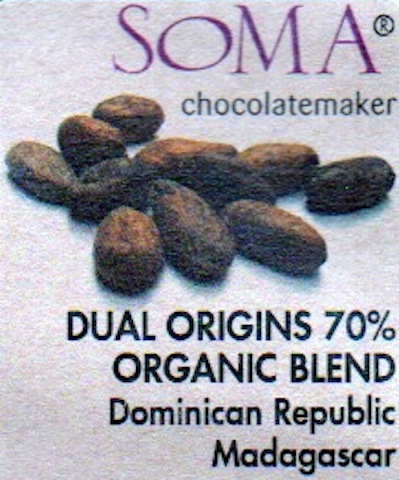 Impact
Soma exercises portion-control with this handy 25 gram offering. Downsized to harken back to the nickel candy bar at, for some, an exhorbitant price while others salivate, eager, even greedy, to buy it. The latter group a far cry from the foot soldiers who fought, & the mouths who protested, in The 5 Cent War.

Shortly on the heels of WWII, The 5 Cent War sent youth in the streets to demonstrate against the price increase of the nickel chocolate bar to 8 cents.

To paraphrase the Beastie Boyz, they had to fight for their rights to candy.

These young Canadians were the OWS of their day. Their bold example the pre-cursor to Occupiers in the ‘home of the brave’ that pricing goods & services should be at the very least optional if not… well, in the so-called ‘land of the free’, free. iPhones, video games, music & movies downloads for nothing. Ditto information. For the record, the C-spot® supports this & will immediately suspend its subscrition rate of $19 per year as soon as food, shelter & clothing are free too.

What probably started out in the 5 Cent War as a spontaneous revolt by kids, ended up the tool of organized labor. Yes, child exploitation pre-dates YouTube. Charges of a communist plot engineered in the Soviet Union ensued (a more sinister verion of the current ‘European Socialist’ argument).

Before hostilites ceased the outcry spread from its cradle in Vancouver all the way across country to Toronto (where Soma hones its craft today).

Whoever the instigators, hand it to the Canadians: while its superpower neighbor fights wars all over the globe – from Iraq & Afghansitan, Libya, Central & South America, Vietnam & Korea, Somalia, Europe – Canada wages conflict over truly monumental causes like ‘happy chocolate’ on its home turf.

Then it all abruptly stopped. An uneasy peace of ever spiraling costs has taken its place.

What would those radical kids of the nickel candy bar generation think of today’s modern consumers paying $5 & more for a bar?

Well, they may be one & the same people, like the anti-establishment hippies in the free-love 60s who became POTUS & corporate CEOs.

This is an exception though. The difference is, Soma makes it worth it.

Aroma   8.6 / 10
light chocolate-cream sauce ladled over thinly-sliced smoked prosciutto with a side of a fruit basket summed & concentrated into those complex types like durian or cherimoya that exude referents to other fruits (the latter pineapple, banana, passionfruit, papaya; mango, strawberry; the former almond, cream-cheese, caramel, tiramisu & more)
Mouthfeel   13.2 / 15
Flavor   45 / 50
those worrisome 'hammy' notes in the Aroma find no quarter in the Taste as the acidity wins out: fruited planes for take-off (plums, berries, cherries weighted in flavor of Madagascar) tethered to a solid chocolate backbone (sheer Dominican Republic) accented by molasses -> lime twist ricochets off this, generating a sour cherry that recedes back into a chocolate juice cocktail to a long brownie fade out
Quality   16.1 / 20
D.R. & Madagascar -- superstar mega-powers of the chocolate universe. 2 glam origins: one rather feminine (Madagascar); the other more masculine (Dominican Republic) in a yin-yang bar. Weird that no barsmith until Soma has so explicitly blended these 2 origins (although Soma joined them together with Ghana in its Arcana 3-100 & too the Mast Brothers in their Brooklyn Blend that also incorporates Venezuelan cacáo). Consider this a first of its kind.

With such an attractive blueprint, this would seem a bar to behold rather than analyze. Alas, some issues pop up warranting intervention.

The pair play a little rambunctiously together... friendly but competitive. Neither outguns nor retreats from the other. Far from a seamless blend -- some perceptible soldering joints -- Soma for the most part gets the ratios right however. For greater integration, it might ride the conche more.