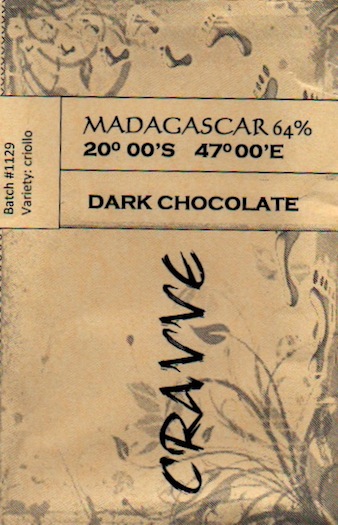 Impact
Due to poor post-harvest methods &/or processing techniques, Cravve of Australia works the brilliant if not arguably the brightest cacáo origin on Earth -- Madagascar -- into a drongo (Australian for 'dimwit').

Nary a trace of the bright fruit acids so customary for this origin. And quite distinct from other semi-sweets of equal 64% cacáo-content from here (Valrhona Manjari; and Vestri's).

The uncontrolled-smoke of these seeds, far more detectable in this bar's 77% sib, ameliorated substantially here by much greater sugar that translates into many browned fruit tones.

Beyond that, this hints at a different kind of Madagascan being harvested by Pralus on Nosy Bé (a tiny island right off the coast) compared to the more prevalent bars out of Sambirano Valley (on the main island).

Either way, another great mistake from Cravve.