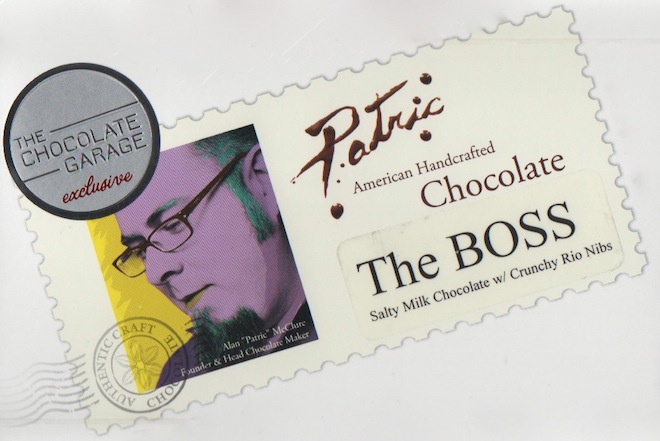 Impact
It may be a man's world but women run it. They cleverly get men to do the things they want them to do. That's real power; that's acute intelligence.

Including the dirty work of industry, politics, & cut-throat finance.

How bitchin' awesome is that?

(Guys, screw this experiment up any more & women will run it all by themselves without you. C'mon, one of 'em is even considering a run for POTUS... & exactly who in their right mind would freely choose that job?)

Yeah, most ruthless bastards were once little boys raised, usually, by their mother, often with daddy bystanders.

Take this bar for example. It appears to be a the sole byproduct of Alan "Patric" McClure. Sheesh, he even puts his mug on the cover of it, right there next to the title The BOSS.

In a sign of just how vulnerable a position, The BOSS is a sticker, a temp label affixed to the package like a sliding name tag on an office door (click image upper right to enlarge).

Sunita de Tourreil, Founder, CEO & Chief Mechanic of The Chocolate Garage put him up to it. All the way from her grease pit in Palo Alto, CA lubed with cocoa butter to Alan's plant in Columbia, MO. She conceived it, birthed it, nurtured it. All in her quest to make the world whole again thru 'happy chocolate'.

Judging by taste alone, maybe there's something to all her happy chocolate talk.

Seriously, though, this chocolate collaboration called The BOSS shares the power & the credit. It points to a wiser direction for interrelationships, keenly aware that any battle of the sexes disintegrates upon realizing that all-out testosterone rage with balls-to-the-walls may create a lot of ills but unbridled feminism by itself offers no cure either.

Instead, it's about re-balancing the drive, getting the yin-yang right, & the ac/dc in everyone to tap back into a collective humanity.

The real boss then becomes you, idealized as 'us', the consumer-cum-producer, the ‘pro-sumer’ coined by futurologist Alvin Toffler, in shape-shifting the world of chocolate as we know it, thru actions & purchasing power, placing 7 billion creatives at the center of a living, breathing global nexus.

Consumers of the 21st Century, after all, are having their say in shaping outcomes, whether it be GMO, traceability, nutrition, labor practices or the environment. Profit-sharing & decision-making will become more equitable as a result.

The intent is to transcend history & make everyone a stakeholder; to decommodify cocoa & move from the commodity markets into the specialty market. By some estimation chocolate is too cheap. What oil generates on the global commodity market in 1 day takes cocoa a whole year. Low price often converts to paying farmers peanuts for it, which contributes to cycles of poverty in the producing world where it grows as fodder controlled by Big Candy. Add in the degenerative effects to the ecology & social relations, & it all mixes up a combustible cocktail. Protests in Tunisia, Turkey, & Occupy Wall Street are the inevitable symptoms writ large.

The right kind of consumer demand can alter the situation on the ground at cacáo’s source in a reverse-dynamic the C-spot® dubs Bar-to-Bean™ in the spirit of pragmatism & activism, & “achieving our chocolate” as it were. This movement is rooted in preservation within diversification, shifting from an industry (preferably an entire global economy too) based on growth & volume geared to satisfying everything people want now at a dirt cheap price… to one that prizes Quality & Prosperity engendering an Ethical Capitalism. It’s a modus vivendi that more is not better… better is better. This demands expansive thinking to lift the world from its predicament but, in short, qualia can solve many problems that plague it.

No problem can withstand the assault of sustained thinking - Voltaire
To be continued...
Appearance   4.8 / 5

Patric deploys Nibs to inordinate effect as they herd the dairy (or vice-versa?; magic tricks that way) & extend an otherwise short length beyond liquidation. Salt meanwhile simply grooves the edges as a multiplier for sprinkling the flavor points. The combine produces virtually no caramel so commonplace in Milk Chocolates. Instead just rich butters & oils & toffee tones in a very tactical, even cunning, construction.

Lest anyone think that that middle vacancy makes this no one's boss, it does turn tongues into different kinds of pink slips. Almost virginal in its re-awakening influence for that final flurry: a virtual scoop of vanilla bean ice-cream.

While this bar yields to many demands placed upon it, The BOSS manages to sustain its profitable run via a gentle but firm hand at the helm.

Yep, it earns its credentials as the new CEO for Chocolate's Ecstatic Officer.