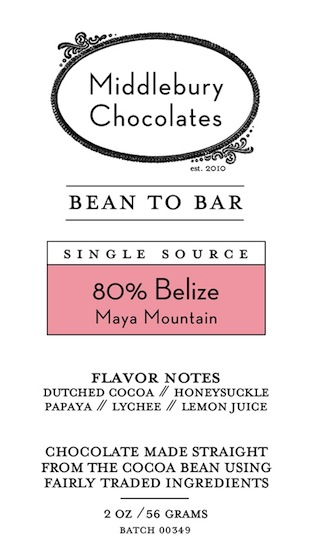 Impact
Fresh picked from a pricker bush, now with thorns removed in the new & improved editions.

The 3rd time's not quite the charm but, at least in the tradition of the Hippocratic Oath, it does no harm.
Appearance   4.3 / 5

Aroma   7.9 / 10
2013
hopping
both the flower (Humulus lupulus) & the verb (hops right out of a sweating ferment box)
cause for concern further raised by big wood (sapodilla) + yeasts
generally fresh save for cotton-tobacco swab &, strangely, an airborne Chuao-level dried blueberry cocoa-butter

Too tannic; bristles with splinters. the C-spot® has usually been a big fan of sapodilla wood ferment boxes, especially rendered into a Milk Choc. This however too abrasive / prickly; the flavor tags stick to each other uncooperatively.

Warrants a warmer roast & more oxidation on the conch. Coconut palm sugar compromises the center passages with an unusual coloration for the origin & contributes generally to the combative nature of this bar.

Moreover, either the pulp characteristics go wanting for this cocoa sourced from Maya Mountain Cacao (MMC) in Belize &/or the ferment cycles inadequately.

Though an improvement from post-harvest problems that MMC bravely acknowledged in the past, this displays the downside of economies of scale. As it expands, MMC wrestles with attention to detail to produce quality results. In the olden days when it started out as just Cotton Tree Lodge with much smaller piles, personal care could be tasted & felt, similar to barsmiths who batched in their kitchen apartments using the crudest implements but netted flavorsome chocolates. Once they upgrade to a commercial space & equipment, the output often turns to just products & units sold.

With time, expect better outcomes. Perhaps in the case of the cacáo presented here, the ferment wood has yet to seal / cure.

Also relatively new to the scene, Andrew Jackson & family at Middlebury are assiduously learning the ropes in a time-honored fashion.

Credit him & them... their technique surpasses Mast Bros & Dick Taylor who also took recent shipments of this seed lot from the same supplier.

2014
Improved posture. A real potent stick-back, literally & figuratively. Swapping out coconut palm sugar for more conventional cane sugar solves one issue while exacerbating another. A cleaner burning sweetener for sure, cane magnifies the underlying challenges facing MMC, perhaps biased somewhat by the inclusion of sea salt which lends it own minerality.

Still, for the 80% class from such a prone vintage, Middlebury takes a significant step forward.

Wood-roasted & the cleanest formulation of Middlebury's 3 Belize releases so far.

Just no great rise though, as these apparently work off an allotment that pre-dates Maya Mountain's improved harvests which this past weekend attained it a rare & truly legitimate heirloom designation (Heirloom VII) .