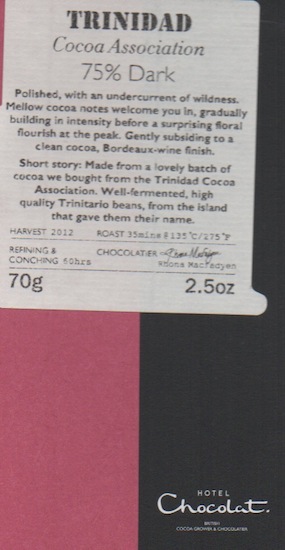 Impact
Rush hour... one of the great modern-day misnomers. It most often lasts longer than a single hour, & usually at a snail's pace.

This bar hails from an island culture that takes its good ole tyme & packs a tender punch.
Appearance   3.9 / 5

Hotel Chocolat ("HC") mentions that Trinidad lent its name to the original Trinitario cultivar, a variant of which landed on the company's own estate in neighboring St. Lucia island. The affinity strikes rather obviously since both this bar from Trinidad & HC's Marcial from St. Lucia envelop a darkly brooding experience. Let's attribute much of that overlap to warm roasting & substantial conching (despite the 10-hour differential between the 2 bars; the settings on the unit may have been adjusted to more or less equalize it) as well as swimming in a loosely-related genetic pool.

The rich cocoa-walnut here rivals Dandelion's Mantuano from nearby Venezuela as the slab of all brownie chocolates, pulling the palate deeper & deeper into its fold, lightened only by that brief bougainvillea florescence. The chalk episode, which HC bottles up as a "Bordeaux-wine" in the liner notes, tells of some suspect traces in the mix -- probably a small fraction of slaty seeds or unwinnowed husks -- yet still winsome.

Such minor blemishes have become an attractive trait of HC as it refines impurities into polished imperfection which extends even to the labeling on the package (click image at upper right to enlarge).