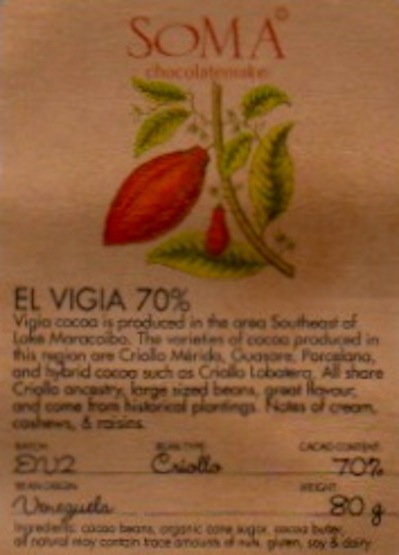 Impact
The message got picked-up in the middle of the night: know anything about El Vigia cacáo?

Ahhh, yeah, something. And nothing.

Followed by some honor code that included everything but drawing blood to seal it.

Academic is one thing (the stuff of genetics; botany; cultivar; region; etc.). Practical another (never sniffed it; how does the damn stuff taste?).

Fortunately a well-placed C-spotter / informant in Venezuela filled in some further details on background. Better still, David Castellan & Cynthia Leung of Soma Chocolatemaker sent this, the real finished deal… what it all boils down to – the chocolate. For more, see below.

Gratifying to be in on the ground floor of this bar; & elevating is the penthouse suite of flavor.
Appearance   3.9 / 5

The Spanish in 1525 found cacáo woods around here harvested by early Americans. Soon the Euros started large scale agricultural production. A half-century later, exports to Veracruz (Mexico) via the harbor of San Rafael de Gibraltar thrived until around the 1670s when the port was decimated by buccaneers & aborigines in an uprising.

Fast forward to 1963 the Government Land Reform attracted new growers to the area who came mainly from the highlands of Mérida State. They colonized & settled, planting cacao selected for disease-resistance from the Eastern Venezuela (Paria Region).

Here they cultivate several genotypes – a mix of imports from Paria & native regional Criollos. This diversity includes Guasare (Northwest) in the Perijá Mountain range between Colombia & Venezuela). Clearly some crosses / diversity are evident even within strains that bear the same name but broadly grouped as Criollos.

Such gems are rare because only one or two thousand metric tons find their way to market per year. (As a yardstick, West Africa produces roughly 3 MILLION metric tons annually.)

These cacáos create a slow-developer that swells into a huge bar / a big-throated chocolate by Venzy standards, home to the omnipotent Chuao, the oft-gutsy Ocumare, & the staunch Rio Caribe leading on farther south to the equally stalwart Amazonas. 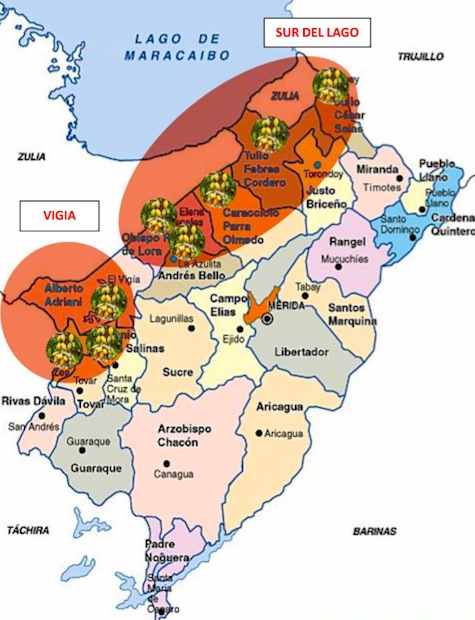 Soma processes just on this side of preserving the traits relatively untamed. Its tough Texture early on gives way to incredibly round mouth, largely due to a helping of added cocoa butter.

The longest portion of the progression -- the extensive midsection -- is dominated by sweet sap & light molasses... the offshoot of those opening raisin-ous chemical compounds that occlude without altogether effacing the cream tones. Indeed, not since Domori's formative period has cashew cream been so identifiable, though at a different less fermented pitch here.

Ultimately, Soma's El Vigia sums up to a multifaceted & irrepressible chocolate -- one that invades & grows on you.