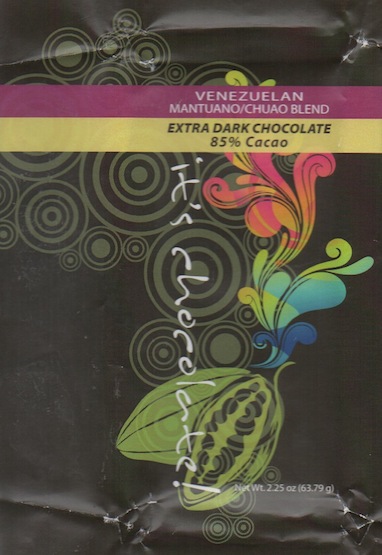 A B-52 Stratofortress carrying two Mark 39 nuclear bombs broke up in mid-air, dropping its nuclear payload on tobacco & cotton fields below. All but one crew member ejected to safety. The flight gained added attention when it became known that one of the bombs came dangerously close to detonating.

A report published well after the incident states that "one simple, dynamo-technology, low voltage switch stood between the United States & a major catastrophe."

According to Lt. Jack Revelle, the disposal specialist responsible for disarming the device, “… we came damn close to having a Bay of North Carolina. The nuclear explosion would have completely changed the Eastern seaboard if it had gone off."

In other words, the Carolinas would've faced Venezuela, from where the cacáo in this chocolate hails, without any islands in between them, bringing it morbidly closer to a vertically-integrated bar.

The pilot behind it's chocolate likewise fails to keep the craft in trim here (extra cocoa butter sees to it) but contrary to that notorious flight, he never loses control of it. Just the opposite: a fearful sounding 85% of a dark-night chocolate ends up landing safely on tongue-ways / tongues-strips everywhere it flies.
Appearance   4.2 / 5

Aroma   8.4 / 10
caramel truffle ganache (cocoa / vanilla / cream) amidst a mangrove scraping the edge of coral
in a word, 'potent'
Mouthfeel   13.1 / 15
Flavor   44.7 / 50
chocolate caramel -> dark fruit (blueberry) -> deep-plunging vanilla-spike into cocoa & tobacco roots -> humus (excellent) -> breadfruit & cotton seed -> sandwich cream -> slow gradual fade... on a vanilla-cream sunset -> macadamian afterglow
Quality   16.3 / 20
A blend that clearly favors the mild mannerism of Mantuano & cocoa butter over the explosive power of Chuao which takes a backseat, virtually an ejector seat. For instance Chuao, so potent, its blueberry inflection-point breaks thru & wows at the beginning only to fall away. Vanilla then bridges & fills in the gaps & differences.

Quite temperate for an 85%, on the verge of detonating until defused by some fat paws.

Unlike it's chocolate's Ghana creation, this bar would benefit from a simpler configuration by losing the add'l butter & spice (doubly so since Mantuano inheres with its own caramel tones). Settle just straight-on cacáo & sugar because these 2 prized cultivars call for it: deceptively sweet, warranting fewer additives. A move that Rom Still of it's chocolate is in the process of completing. In that way, especially if the proportions continue to side with Mantuano (though this can stand greater Chuao presence), flavors will impress stronger on the palate without falling off the ledge by the mid-section in a show of just how tolerant Venezuelan cacáos can be.

Even so, a worthy addition to the 80% class.