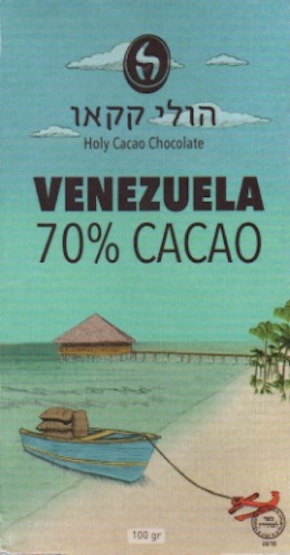 Impact
UPDATED / UPGRADED REVIEW: The following review features Holy Cacao's Mara from 2014 and its Venezuela Blend in 2016. Overall rating at upper right reflects most recent bar only.
*********************************
Venezuelan cocoa crafted into Israeli chocolate to remind of Rabbi Ovadia Yosef who once served as Israel's chief Sephardic rabbi. While revered by followers, his ornate outfit, replete with a gold-trimmed black cape & upswept hat, combined with his ever-present dark glasses & habitually slurred speech, made him an easy target for caricaturists.

He’d greet visitors, be they adherents or prime ministers, with a playful slap on the face.

Rabbi Yosef created major political-religious waves by favoring land-for-peace deals with Israel’s neighbors, invoking the Jewish concept that preserving life is the highest commandment – a position that runs counter to other rabbinical doctrines that declare it unlawful to hand over any part of the biblical Land of Israel.

Like him, much cacáo from Venezuela appears gilded, & this first one (Mara) wears shades that in effect blocks out its brilliance. The other (Blend) lets it thru practically unfiltered.
Appearance   4.4 / 5

Blend
flash fruit (cherry backed in rosehips!) -> dry cocoa tannin -> let the plumes & sprays begin... a soft bounty of strawberry, mango & papaya adorned / adored in supple chocolate -> black sassafras opposite black cumin seed -> grows foggy -> prune -> almond-plum chocolate closer -> sweet black currant finish
Quality   17.4 / 20
Due to the political situation, the difficulties in working with Venezuela & getting any quality produce out of the country are inestimable. Some, somehow, manages to leave for export. Such as this.

Color alone ascribes a certain pedigree to this varietal known as Mara, a cousin of Guasare that hails just a few valleys away. Serious lineage. The village there harvests but 1 ton a year.

Flavor more or less confirms the relationship -- though, in this instance at least, in an underwhelming manner.

Holy Cacao received a nano-lot. Very large seeds however &, in the raw, they're just absolutely palatable, buttery, even mouth watering.

The markers generally too obscure here in this bar; a drawback given that most Venzy cacáo starts out to begin with as rather soft & subtle. This particular allotment bears issues with probable terpene compounds, cheated by a slight under-ferment, & a butter pad that suppresses more than enhances.

Nonetheless, its pedigree still shines thru.

Blend
A combo of Patanemo, Puerto Cabello, Rio Caribe, Sur del Lago & Carenero.... some of the more potent super-studs of Venzy cacáo. Given this all-star lineup, Holy Cacao probably could've thrown these diverse cocoa nuts against a wall & come up tasting great (who knows, maybe it did so in some divination rite; in all likelihood though, Jo Zander's skill took precedence over luck). But unlike previous super-blends which disappoint into let downs, the syzygy here works wonders & bangs it out.