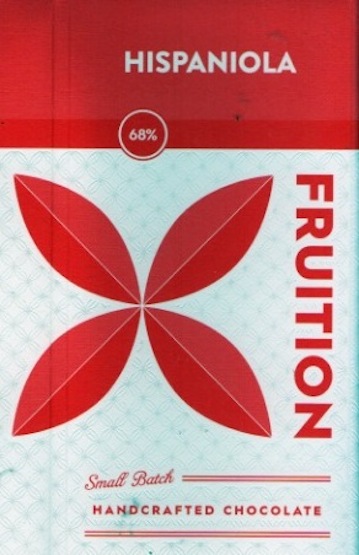 Impact
Calibrating the cacáo-to-sugar ratio ranks among a barsmith's primary decision in the whole creation of a craft chocolate bar. Most just accept with blindfolds fastened to the oft-arbitrary & obligatory metrics of 70% or even 75% cacáo-content, either as some mythical magic or more likely some marketing benchmark ('ooo, 70%, that sounds so heavy').

Bryan Graham of Fruition suffers none of that in this bar from The D.R.

By meticulously setting the bar at 68%, then pampering it in a cocoa butter pad, plus adding some make-up foundation with vanilla (committing a, gasp, heresy according to the Neo-Orthodox misguided by dogma & ideology), he serves notice, viz., to hell with idolators. Only 1 signpost directs his endeavor: Flavor outcome.

Hispaniola by Fruition…. all in the quest of respecting rather than indoctrinating the seed that is cacáo.
Appearance   4.5 / 5

And so equipoised between the Dark & the Semi-Dark almost by halves (1st versus 2nd, the light / dark, the semi bitter / sweet, yet several data-flavor points overlap to bridge them all). Notable in this regard: vanilla, which plays a subsidiary role, never rearing its orchid, simply in service of entraining the compounds to a unison whole.

For a young label of several high achievements already, this may run shy of its peak (because of the seed lot involved, good nonetheless) but among its most deft in spotlighting the culinary skills of Bryan Graham. Craft like this vaults him comfortably into the Top-5 barsmiths in the Americas; arguably the Top-3.

Perhaps THE Dark bar for the masses who think only in terms of Milk Chocolate. No mean feat.