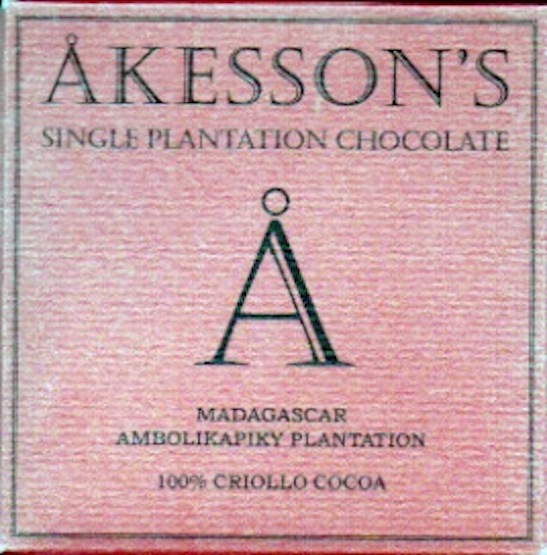 When he became shipwrecked off the coast in 1832, the island Queen Ranavalona I invited him ashore to engineer an industrial complex for manufacturing machinery & armaments. Her aim: resist English invasion of her territory. Laborde, originally from England’s historic rival France, eagerly agreed. And succeeded. Years later he tried to collect by dethroning the queen. The attempt failed.

Bertil Åkesson, a Madagascan of Sweden descent, repays any outstanding debt. By bringing his own materials -- cocoa, sugar & cocoa butter harvested from his family estate in Madagascar, plus recipes, to processing facilities in France for finishing into chocolate -- he ensures that the French (& the world at large) will savor the fruits of his considerable labor from this island's bounty.

In keeping with the legacy of Laborde, Åkesson unleashes a killdozer.
Appearance   3.2 / 5

Aroma   9.4 / 10
dark dense cocoa-cream point leavened by photosynthetic ions / oxidation (i.e., fresh breeze off the coast after the rainfall)
settles down on vanilla-topsoil
Mouthfeel   12.9 / 15
Flavor   48.4 / 50
chocolate-chooclate start, real chocolate, unalloyed, without a speck of dirt -> clicks on some sweet cream & vegetable greens (semi-bitter but savory… quite the rare & appetizing combination) -> melt thru favors cocoa butter to the benefit of the cream quotient while retaining some vegetative aspects (which recede into the background)… for a marshmallowy cloud… hugs this for the longest -> teasing spice cake -> final flush a medium-soft tannic brush commingling wood / cocoa / spice… an ever-so-gentle reminder that this, after all, contains only reducing sugars rather than cane sugar
Quality   19.2 / 20
Some may confuse this as just an update of Pralus' Madagascar 100% released many years ago which, at the time, represented the peak achievement for unsweetened chocolate. Since then it has fallen from grace.

No worries. This, along with The Chocolate Tree's 100, fills the vacancy. Admirably.

Åkesson's 100% Criollo -- a tame though by no means timid 100%. One of the few to reside in the Semi-Dark category where most inhabit Dark or even Brut territory. Includes stretches when the pal (for palate) loses track of the fact that this is a 100... so accessible and inviting, even enticing.

Uncanny too. Genuine chocolate flavor, almost unprecedented for an unsweetened. Moreover, by midstream it flirts as a Milk Chocolate.

Given the advertised & presumed pedigree which stands apart from this island's customary brash & acidic cacáo -- witnessed before in sweetened versions by Domori and Rózsavölgyi, as well as Åkesson's own -- this inclines with poise, unlike most 100s which lack composure that they lash out & assault the senses in a test of wills & endurance.

The only crutches in the configuration: an additional cocoa butter pad + a lecithin assist, both of which groove the tracks (Texture and Taste). How revealing it might be to abandon those to let these seeds roll on their own. That could just elevate this to the Goddess-Queen of all chocolates.

As is, still an undeniable member of the 100% pod-strength pantheon.