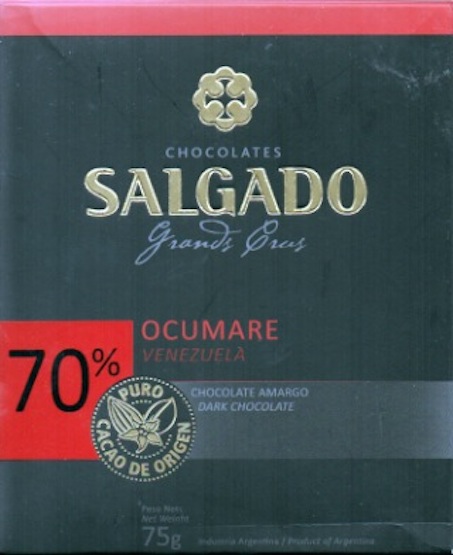 According to The Jetsons everyone was supposed to have a flying car by Y2K. Let's hope Bezos delivers on his drone plan. Freight is killing chocolate.

Whatever the costs, get this bar from Argentina.
Appearance   3.4 / 5

Aroma   8.4 / 10
budding nut woods rooted deep in soil, ground mushrooms scattered around -> banana top note & dense cocoa in the middle
temptation chocolafied
Mouthfeel   13.6 / 15
Flavor   46.4 / 50
super dark choc as if from antiquity, enlightened so sweetly by cream -> a shaved sliver of nutmeg, another of vanilla but, above all, keeps streaming cream -> dates -> caramel -> the tickling root beer of sichuan pepper -> brief 'sroom from the Aroma & some subtle rear action peach -> closing char in an ode to Salgado's burnt-out days of yore -> post-script raisin skin & mite walnut
Quality   18 / 20
Years ago when this site reviewed Salgado before just about anyone else ever heard of it, the company exhibited strange bipolar tendencies. It burned all their Dark bars to kingdom come but ruled Milk Chocolate with a manicured technique almost unrivaled. Now with this bar it brings some of that milk mastery over to the dark-side.

Thunder 'n lightning / chocolate 'n cream. Coast-to-Coast flavor… from the coastal valley of Ocumare, Venezuela to the tip of South America in Argentina where Salgado operates.

Nothing randomized or extraneous.

Yeah, it overshoots the roast by a degree or two & thus effaces some of this varietal's upper range. And, true, Salgado commits heresy in adding CB +, gasp, lecithin so reviled in some quarters. OK, the overall contour just too smooth, lacking the bumptious curves & angst in vogue today. BTW, when did modesty become criminal? Ever since the digital simulated hyper-reality so newborns could barely pay scant attention to anything analogue until their stroller gets hit by a MackTruck while mommy posts a Snapchat; as well as the jaded-aged on the other end of the life cycle who demand shock therapy to restore any sense stimulation, thus craving searing & scouring abrasions.

They'll find disappointment if not fault in the zero astringency of this bar -- absolutely none; so clean the evacuation. Ditto bitterness save for that charred fleck at the tail. Little of the advertised highlights either for that matter: the included spider-graph promising acidity for instance. So be it.

A chocolate's chocolate. Straight-up / cream chaser. The way it was supposed to be in the beginning to the end of time...

Dark in tone more than actual Flavor which ripples with light & sweetness. Profile bears the hallmarks, specifically the dairy & spice, of Ocumare 67.

According to The Jetsons everyone was supposed to have a flying car by the year 2000. Let's hope Bezos delivers on his drone plan. Freight is killing chocolate.

Whatever the costs, get this bar from Argentina.