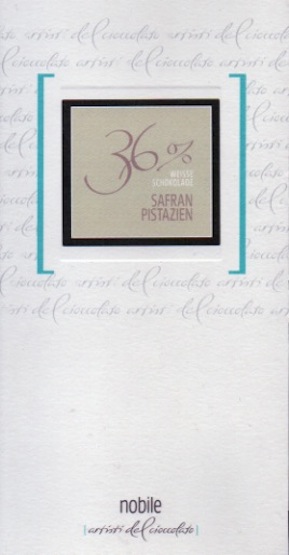 Safran Pistazien
placid for Nobile & even for a White
very dairy-cocoa butter centric, nary a flutter of the inclusions which heavily speckle the surface
Mouthfeel   14.2 / 15
Flavor   45 / 50
Sauerkirschen Thymian
herb first, followed by a sweet 'n sour cherry backstop… ride each other for a considerable length… the tart fruit gaining in strength as the thyme recedes into a black pepper ghosting

Zitronen
as the Aroma, so the Flavor, bright as lemons themselves cupped in Milk Choc -> thin wafer

Sauerkirschen Thymian
Odd couple hooks up into a happy marriage. All about the inclusions -- chocolate merely a support party at the reception while the cupids take to the dance floor. The Venzy 65% Sur del Lago too little & too benign anyways to leave an imprint.

Kaffee
Not just any ordinary coffee but Blue Mountain, the fabled sought-after variety from Jamaica. So precise the melt -- almost a time-lapse / time-release capsule of flavor -- even as it includes some granulated grit at the tip.
None like it.
Ahhhh, hold it… coffee-cocoa nuts recall Coppeneur's stratospheric all-Jamaican bar (including the cacáo). Where that stayed on the dark side (more like Semi-Dark really at 65%), this encamps Café-Latte Slitti-style with 42% Milk Chocolate. It joins Blue Mountain to cacáo from the DR.
Could stand a bit more chocolate presence since Felchlin likes MCs on the creamy / buttery side at the expense of cocoa mass, muscle & tannins.
Still, among best in category.

Safran Pistazien
36% Cocoa Butter content
Tremendous combo / phenomenal finesse -- saffron / pistachio / White Choc, all 3 utterly supple on their own, & together just achingly soft… both taste & texture… the inclusions curb the cloying nature of White Choc. Nor does dairy, particularly its casein proteins, intrude.
Greater than a Great White, a Meta-White.

Capsule Summary
Creative, even daring.
A bit shy on the cocoa mass though (attributable to Felchlin which cream-puffs its Milk Choc) & hence slightly disproportionate on the balance of ingredients in favor of flavorings.
Rumor circulates that Nobile's boxed assortments are even better.