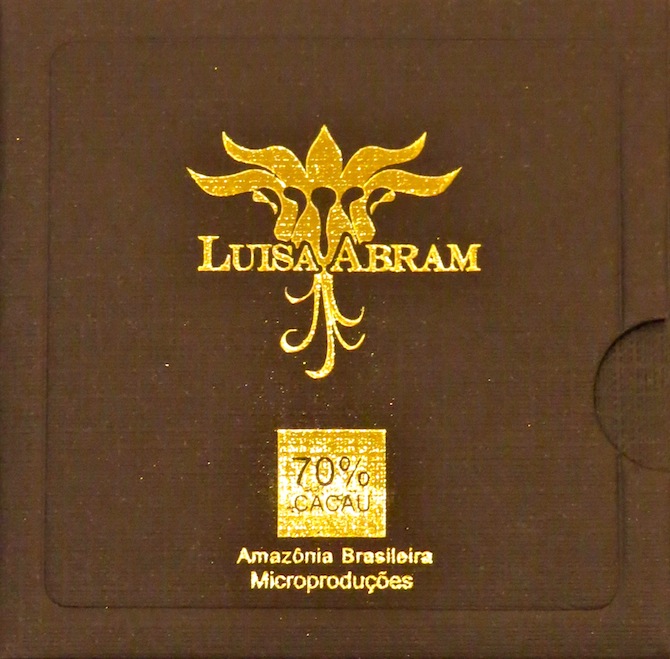 But every now & then, a breakthrough discovery, or more accurately, re-discovery occurs.

Given what cacáo hunters, choco-hounds, researchers & scientists know about the diversity of cacáo, the only puzzle is why so little of that diversity hits the marketplace. Chalk that up to a) logistics (just plain damn hard to physically get to the stuff let alone get it out of the jungle); b) vanishing diversity (in favor of bulk clones or, worse, clear cutting bio-diverse hotspots for soybean farms & cattle grazing); & c) measly pay (sorry, but for all the fappy talk about Fair-Trade / Direct Trade, cracking open cacáo pods to scoop out cocoa seeds remains a back-breaking bitch that fetches nowhere near a Silicon Valley salary).

Hopefully that will all change with organizations such as the IFCIC in Trinidad, Bioversity In'tl, HCP, & LWCR. Then again no one should hold their breath thinking the rainforest should be left standing to filter greenhouse gases so humans can eat chocolate. Ahh, on second thought, maybe that could soon be the last breath of fresh air. So hold on & hold it in... until Mars colonizes its namesake planet. Yay, corporate branding the Milk Way®.

This sampler pack from Luisa Abram constitutes one such find; perhaps every bit as significant in its own way as Cru Sauvage, Xoconuzco, & Mathale are in theirs. Indeed a couple of these wild-harvested varieties represent distinct genetic denominations.

That it hails from the Amazon, deep in the greatest rainforest on Earth where on average 1,000 sq miles undergo deforestation every year, causes both hope & alarm.

The Amazon faces increasing pressures, impinged upon from all sides for fleeting profit. Clear-cutting at the hands of loggers’ chain saws (often to build coffins for developed countries that end up buried). Mining & drilling rigs (some illegal). Estimates run that at current rates of destruction, the Amazon will be chopped off the face of the Earth in a matter of decades.

Chopping down the rainforest for timber, then letting cows graze the cleared land or farmers til soybean rows, presently has greater perceived value than leaving it intact. When calculated “under current development models”, concedes Chief Almir of Brazil’s Surui people, “a standing forest is worth less than its extractable parts”.

The fate & fortune of chocolate such as this ramifies with rainforest sustainability because cacáo, as a champion tree with economic value, gets along great as a playmate with all the other flora & fauna in its natural habitat.

By responsibly harvesting it in an eco-design like the first Americans who intensely managed the Amazon into a proto-green urban zone prior to Columbus, humanity may once more reap the abundance still locked away in the woods of fruits & flowers & medicines few have even heard of.

Wild cacáo transformed into chocolate from Amazonîa Brazil. A survivor-cacáo, for centuries, in the jungle teeming with bio-diversity, vibrating life-force, deep roots, vigor &, in this case, taste... unlike too many of the fertilizer-pumped & petro-chemicalized clones on plantations run by the Candy Giants.

In a (hyphenated) word, extra-ordinary.

Purús 70%
Batch 1 / 2015: unlike any other… cream of potato-mushroom soup warmed over an open wood-chip campfire with baked pinto beans & ham bits tossed in like croutons
Batch 2 / 2015: slightly more hammed up
Vintage 2016: strangely more potent than its 81% sib
Vintage 2017: a musk rut

Acarà 81%
Ferment Cycle A
molasses-tinged cream puff pastry -> vinyl & tobacco
really set in its ways, even after hours of aeration, save for a bromeliad frond

Acarà 70%
2016
more of the same as the 81% (above) but now pronounced molasses (influence of the sugar type?)
eventuates caramelized molasses -> the breaded aspect of Acarà's 81% flavor apparent on the nose here + a super-savory fruit point (rare)

Terrifically mild for an un-roasted seedling (yeah, they're about wee small) & as a result somewhat short-lived.
Snackable but how it projects as a chocolate may be limited... huh

Purús 81%
Batch 1 / 2015: deep treacle, almost black sap -> flirts with a detergent soap bubble, goes to "unsweetened" dusty cocoa instead... enveloping cream softens & sweetens it until overflowing a teasing bitterness at the rear for a kind of scalded milk -> alluvial deposits -> spiced chicory
Quite sedate, easy & creamy for the 80% class. Not that there's nothing to it, just plain, simple, direct & tolerable considering less than a quintile of sugar.
Batch 2: big licorice -> black fig -> meal -> back bitter assuaged by cream -> floral soap bubbles -> comes back into alignment with itself -> resolves into licorice-fig cream
The primary difference between Batches 1 and 2 lies in their fermentation length. The first underwent a longer cycle (8 days) whereas the second experienced a shorter 6 day ferment which left fewer of the native bio-chemical compounds pre-digested by enzymes in this crucial process. And the results can be tasted. All a sign that post-harvesting has yet to optimize the settings. To further complicate matters, that soap off-note, absent in the Batch 2 - 70%, suggests something about the handling in the transit / storage of the seeds or cleaning of the bar moulds.
Vintage 2016: light caramel -> dirty bramble / dark topsoil (good Earth variety) -> feral sap 'n vine -> tar 'n not nicotine but cream -> back smoke eddies up sweet licorice -> grilled fig! turns to a ground cherry
Alive. Not vibrant per se nor brooding either; but a dense jungle jam. Unusual traits that build character.
Vintage 2017: hash brownie -> coffee -> white petal backed in char -> cream
Simplified reduction due to a deeper roast. Generic.

Unglamorous, un-nuanced but not unappreciated. Steadfast & poised in a testament to its simplicity: bang-on core cocoa flavor. Plays much sweeter than the ominous-sounding "81 percent".

Ferment Cycle B
of all the bars this easily the darkest -- a near blackened chocolate
dry dense brownie, unleavened -> biscuit 'n cream backfill -> flash Tootsie Roll® -> Oreo®... no breathing room on the palette -- a combination gum-paste texture befitting a concentrated profile; much tighter & wound than the Ferment Cycle A (above); perchance less imperfect but also less expansive

Late 2016
oven baked brownie with brulée crust -> obvious green nut to form walnut brownie -> sweet cream
But 19% sugar & yet no lack for it either. An 80% class bar so comfortable with itself -- no strain or instability. Quite the opposite. Poised & contained.

Acarà 70%
Early 2016
light breaking chocolate escorting subtle pineapple -> milk chocolate -> mocha -> Dark-Milk -> mellows out to a near White Chocolate countenance -> fudge exit
Late 2016
white fruit (biriba) -> sweet brownie -> cinnamon twist over sapote -> massive cocoa swell -> caked-on chocolate -> chocolate milk
Simplicity confirmed. Nothing to it; but fabulous in its simplex. 11% add'l cane sugar from the 81% (above) converts no appreciable esters because virtually none exist to begin with. The difference between them practically negligible. Instead a wondrously sumptuous plain chocolate experience of universal appeal (excluding those who demand their tongues washed out & scraped by volatiles for a good scrubbing of their foul mouths... errr, palates).

Quite linear, a near flatliner... melts darker / heavier than its 70% content. Plodding & mostly downcast.

Jarí
Batch 1 / 2017: cocoa -> light fruit swipe -> spice bread into graham cracker -> licorice -> black seed from the Aroma -> mallow root -> soap bubble
Batch 2 / 2017: candied cocoa deeply interlined with red pitanga -> then the smoke rises & those roasted notes detected in the Aroma turn to creosote & coffee -> retains & intermingles with foregoing fruit which by now turns tart
One of those rare occurrences: charred citrus! Falls under the category 'work in progress'.
Quality   -- / 20
Barsmith Luisa Abram, in conjunction with her dad Andre Banks, travels from their home in São Paulo, Brazil way west to the village of Boca do Acre in the heart of the Amazon. There they coordinate with the local Maracaju community inside the Arapixi Reserve to canoe a good stretch along the Rio Purús.

Due to the nature of collecting the cacáo, over fermenting occurs caused by picking the pods off wild indigenous trees, splitting them open to scoop out the cacáo seeds en baba (re: still surrounded by pulp) along the riverbanks, bagging the seeds in fabric sacks, then paddling onward to the next set of trees.

The whole journey may last days.

If it all sounds familiar that's because it follows in the wake of Volker Lehmann's Rio Bení enterprise.

Consider their post-harvest method a sort of pre-ferment before the official one. And considering the overall benign character of this cocoa / chocolate, no ferment can be long enough it seems. So mild-mannered, the pulp probably equally composed. Modestly sweet 'n easy smooth flavor. Underwhelming for some (the hardcore Dark bitches & bastards); welcoming to all. Pure in intent. Genuine heirloom endowed with age, purity & flavor.

Imperfections abound. So this year -- 2017 -- a crack ferment specialist was called in to optimize the lot. Future releases shall bear the fruit of those fermentation trials.

DNA fingerprinting verifies that at least portions of this river valley conform to Dr. Juan Carlos Motamayor et.al.'s taxonomy that reclassified cacáo into multiple subspecies from the out-dated Criollo-Forastero-Trinitario handle. 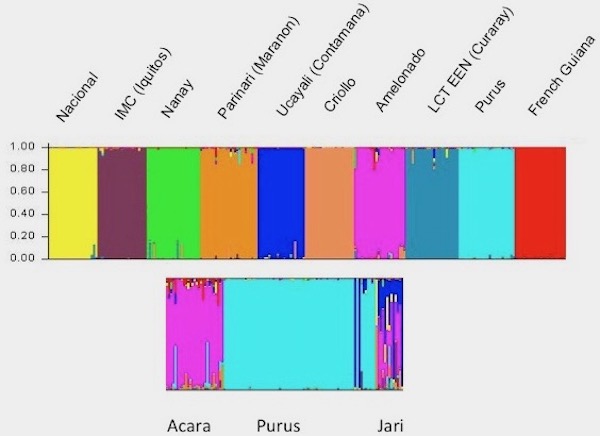 The exciting news: that taxonomy largely based its conclusions on specimens ex situ or sitting around in disorganized / under-utilized gene banks. Basically fusty museums for cacáo / chocolate. The project encapsulated in this bar awakens the theory by reaching & grasping the actual original in the wild / in situ, heretofore relatively neglected. In line with the sound of one clapping & a tree falling in the forest with no one to hear them, what good is a cacáo if no one enjoys its pleasure chocolate?

Andre & Luisa's venture lends hope that humans might get right after all & grow up into nurturing stewards on the only known planet with chocolate. Alnog the way it can turn the C-spot's® Chocolate Atlas in a real-world navigational tool.

Score another for rescue & recovery. Just a couple dozen more to go.