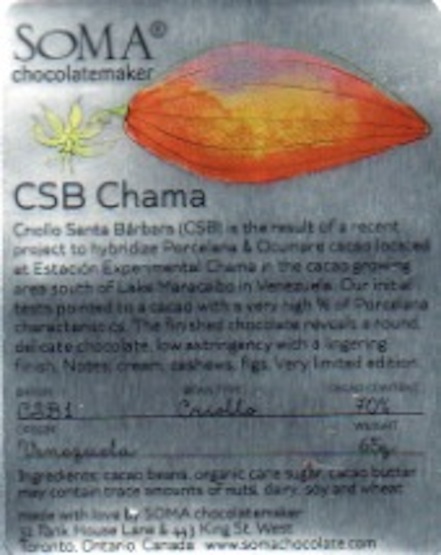 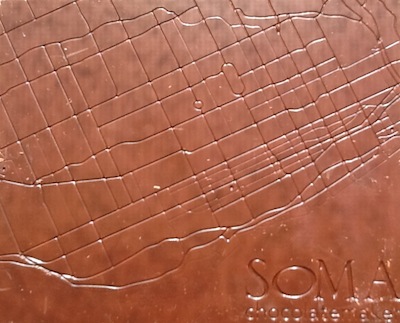 Aroma   8.7 / 10
Porcelana
the simple stuff of the chocolate-gods
that breaded essence of Porcelana (both wheat & breadfruit) hoisted on just the softest nut wood branch sprouting a Spring green shoot, fixed with olive oil to harken way back to Amedei's early release of this varietal
one to get lost in

CSB Chama
peaceful beginning… very cashewy (ditto the Texture's fleshiness) -> just a touch of the Aroma's marmalade carries thru (orange blossom / apricot) -> a lone smoke wisp of roasted chicory -> streams away cocoa cream -> fruit echoes on the way down along with a Milk Chocolate closer
Quality   17.8 / 20
CSB Chama
70%; Batch CSB1
A reputed cross twixt Porcelana and Ocumare from the Estación Experimental Chama whose breeding programs provide sanctuary for some of Venezuela's prized varietals. Clearly this hybrid favors the Porcelana as Ocumare appears but a ghostly bystander (offering little in the way of its core chocolate principles).
Achingly delicate -- perhaps too much so to verge on non-distinct & a bit devoid. Lacks depth, such a shallow subsurface, & almost lacks presence in stretches altogether except for those fruit offsets & the smoke wisp.
All resolves well however.
No worries of any wash-up, cream-out, or blank drawing since those dappling fruits amplify the deeper the melt to keep piquing interest & bring some certified Milk Choc analogues along with them.
Given the reclined traits, this cacáo should easily be able to tolerate upwards of hi-70s, to even 80% cocoa-content which might sacrifice the more gentle cashew-cream slope for greater definition of the overall compounds.

Porcelana
75%; Batch POR1
Another wonderfully delicate strand.
Soma chooses a somewhat darker countenance in line with Coppeneur's -- no hallmark strawberries 'n cream to speak of for this genotype. In this lone respect it veers off from the prototypical Porcelana; otherwise it represents the pure strain. Some of this owes to the relatively high cacáo-content; the rest to a fairly substantial refinement.
It puts the vandalism of the first Porcelana manufactured in Canada in perspective, as well as in the rear-view.

Capsule Summary -- 2 bars; 1 flavor. And with taste like this just about everyone will double-down at Soma's table.
As per the depth chart of the premium choc niche, Soma now schools most of its peers in North America. Precision-crafted luxe sans the Euro heft.