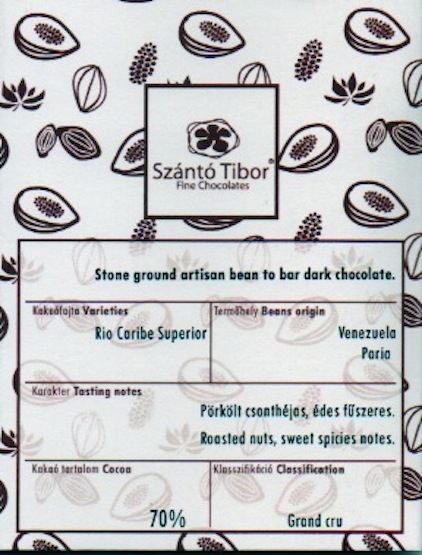 Impact
The famed Coromoto Ice-Cream in the highland town of Merida, Venezuela, listed in the Guinness World Records book for its 863 different flavors, closed its shop due to a shortage of its key ingredient: milk.

Hugely popular for its exotic & strange combos ranging from beer to beans, Coromoto suffers from the same acute shortages as other basic goods in the country like toilet-paper & spare tires -- the consequence of an economic slowdown, the highest inflation in the Americas, & strict currency controls.

The gov’t points to political foes among the wealthy who, it claims, exacerbate economic problems by hoarding & price-gouging.

Only 3 bars herein from Szántó Tibor but they contain an entire world of different flavors for this origin. So much so that Guinness might want to look into this.
Appearance   3.9 / 5

Porcelana
stoned cocoa (grinding stoned) -> cottons together soft fabrics -> fleeting strawberry -> persimmon (slight tannic caustic / drying effect) -> blue vein of blue cheese in a frangipani backdrop (special)
a Porcelana unlike just about any other; by no means an exemplar of the varietal… in some respects it cuts against its intrinsic traits without annihilating them but, still, quite transmogrifying
one genuinely creative interpretation on this venerable cacáo
Quality   18.1 / 20
Some brilliant weirding going on.

An easy grind & just a lap-dance of a churn leaves lots of flavor tags on the table. But Venezuela's superior genetic stock furnishes the latitude that allows for a Szántó Tibor approach to barsmithing & still come up with the goods of near-supreme flavor. So where its Nicaragua Sweep strikes as stark & austere, these bars avoid such.

Szántó Tibor possesses a very individualized style. Some may consider these bars as mistakes / mishaps but that'd be a misconception. They're carefully calibrated &, though by no means conventional, incredibly consummate so by the whole experience, the flavor points interrelate & make sense.