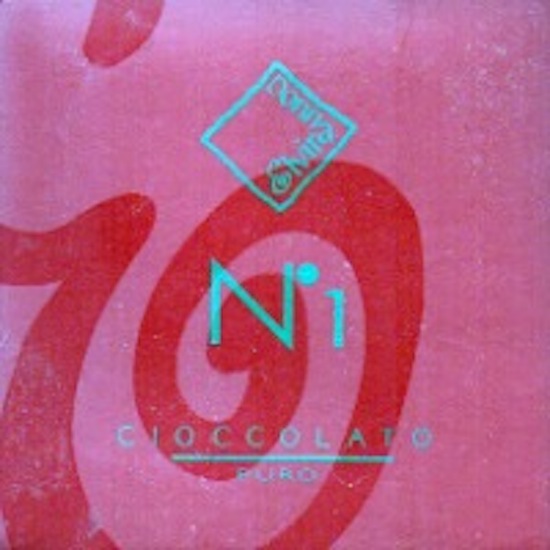 Impact
Years ago -- like 2009 -- the C-spot® first reviewed Donna Elivira explaining the whole ‘Cioccolato di Modica’ style – very rough & crude (or rustic & simple, depending on POV), based on "traditional" (RE: mythical) Aztec / Mexìcâ methods, spuriously handed-down to Sicilians by the Spanish in the 16th century who were then conquering what is now Mexico.

The old-school way calls for cocoa, maybe spices - vanilla, chili, & cinnamon - & definitely lots of sugar (the latter two nowhere to be found in the pre-Columbian New World), then laid out on a lava stone, heated slowly by charcoal, & finally worked into shape with rolling pins.

Talk of cold-pressed, & untouched by modern machinery, is pure hype nowadays by cocoa-spittle-gurus, as most of these Sicilian makers simply re-melt couverture purchased from giant chocolate companies, adding more sugar to the mixture (the reason why almost all are in the semi-sweet to very sweet range). The amalgam then heated enough for cacáo butter to melt (roughly 95ºF) but not enough to dissolve the sugar crystals.

And sugar is what it's really about.

Perù Amazònico
a yeasty bread affair… Welcome to the Bacterium

Papua Nuova Guinea
another peanut load but smoked, attached to some peat & cocoa underfoot -> sugar comes on fast to take up most if not all the oxygen -> exhales sweet tamarind -> smoked chocolate down the gullet

Perù Amazònico
More like what a "raw" bar should taste…. maybe Donna Elivria mislabeled these 2. Either way, passable under any circumstance though far from commendable.

Soconusco
70%; Batch L197
Really gratifying. Excellent & multi-dimensional all the way around; doubly so for a passively refined bar.
Demonstrates select sourcing, for Soconusco in SW Mexico can be rough & then some, + careful alignment in the semi-processing.
Should convince anyone today that cacáo furnished sufficient casus belli for Mexìcâ Emperor Ahuitzotl to send his forces all way up north in Tenochtitlán down south to Soconusco in 1495 to control the area's production of it. And this ain't even the original heirlooms.

Papua Nuova Guinea
70%; Batch L194
Quickest release & decay of the set, quite fast which will cause some 'consumer remorse' that the good is gone for PNG can be dicey yet this rolls up a hot chocolate in more ways than one.
True, sugar obscures by the mid-palate on... only for that mechanically dried cocoa which imparts smoked characteristics to stage a revival without which this bar would collapse either via cloyed-to-death or carbon monoxide poisoning.

Vietnam
70%; Batch L194
Viet cacáo, especially around Ben Tré often projects acidity, sometimes quite intense & blaring. This bar contains & controls that into a hi-def fruit basket. One of the sweetest, most succulent Viets produced. An all-star.