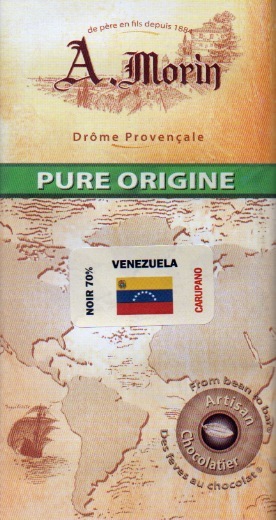 Franck Morin has now released so many differing single-origin / single-estate bars, which clearly required some heavy paddling across the globe in sourcing them, that he could never be accused of mutiny in any existential-chocolate sense.

Virtually all of them uphold a classic bearing, nothing turbulent to upend & capsize the craft.

Ahh, but as Derrida would say, avec une différance… oo-la-la.

Here now a bounty from one of the most renowned of all cacáo destinations (Venezuela) & a barsmith who knows the course (Morin). He amongst the few to simultaneously forge ahead & make waves (as in submarine currents really)... his oars cut so smoothly it sends a shiver 'n a shudder down the rudder -- & things just ain't the same again.

Carenero as it is / as it should be

Classic, big-bold, right in the mouth

Just the second Guasare to enter The Chocolate Census after Domori (two if counting its related cousin Mara). This pale-seeded varietal produces an off-pink brown colored bar here, still dark enough though to attribute that to the roast or to wonder just how Guasare is this?
And quite a dark tone for a Morin; roasted on the upper edge & yet so vibrant too. All comports well with each other & with itself. Indeed, amazing juxtapose twixt the char & the citric of near-exquisite equipoise. The latter causes a re-assessment of this varietal's flavor profile -- more in line with the aforementioned Mara than the Domori Guasare.
Either way, a revelation deserving of its own separate review.

Skip the pairing exercises of chocolate with wine or single-malt, this incorporates its own.
An Ocumare unlike any other -- in just one measure of how different, precious little CQ (for Chocolate Quotient or baseline core cocoa) from a cultivar oft-noted for an abundance of it. Those compounds racked instead into deeper inflections.
Huge, vast, structured, architectural… a towering bar on which every floor situates a flavor drawer; borders on redefining 'complexity' in chocolate.
Practically accomplishes what Soma's Stratus achieved with Ocumare but without the external manipulation; whereas that gushes exuberantly, this sublimates the depths of heights & vice-versa.
From a barsmith with several stellar releases, Ocumare 70% arguably his greatest.

Porcelana
Lot 091214; Merida / Zulia
the fragrance out of the wrapper gives this away: strong cocoa-nuts (classic Venzy macs submerged in a milkish choc) -> lite spice (sassafras) -> easy banana leaf -> back strawberry… as much 'straw' as 'berry'… ergo, the hay which follows -> earlier macs re-surface as cashew -> roasted element (as in the Periodic Table of…) at the very fringe (copper) -> warm (rather than hot) cocoa topped with marshmallow -> brownie-cookie in the aft-linger

The Grand Empress of cacáo -- perennial as ever. So correct: heritage-quality / vintage-level… Morin nails it.

This, along with a couple others in the collection, re-introduces these fabled cacáo groves with fresh takes that open eyes & dilate taste-buds for everyone but the most jaded who've 'had it' & so require abrasive solvents (re: acerbic / acidic / astringent bars) to scrub their mouths out & open the sensory pathways leading to the cortical response area (somatosensory cortices + the anterior, mid & posterior insula) of the brain that controls taste, aroma, & how flavors are perceived.

Bottom Line: some apparently super-select seeds & Morin germinates the flavor from there.

NOTE: Lot #s indicate all these bars were tempered & wrapped late summer / early autumn 2014 & allowed to naturally age for almost 1 year prior to consumption, which may contribute to their evolved flavor profiles compared to an earlier 'fresh' state.
Quality   18.9 / 20
The job of a critic, even a chocolate one, is by definition to criticize (what a low-life!).

Damn it, nothing doing here except cavil on about the chintzy French foil wrapper (seriously, from Valrhona to Cluizel & et.al., how about an upgrade, please).

Other than that, this review idles past unemployment -- it's retired.

Thanks, Franck, for the pink slips.