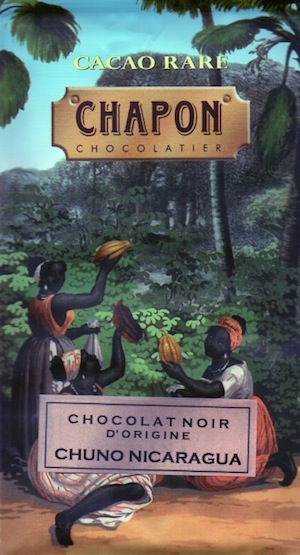 Impact
Another English concern with "international" in its organization name to broaden provincial island horizons into the cosmopole (no worries, deep down w’all hicks, hillbillies & local yokels) announced its periodic ratings of the percentage of fine cocoa exports from producing countries, ratings based largely on lobbying efforts of the constituent countries themselves. Welcome to the politics of chocolate.

Apparently it has a rather inclusive definition of ‘fine’. Not necessarily fine per se, but simply clean & free of infestation, disease, bolts, nails, & other foreign objects that often escort cocoa in export sacks. .

Nicaragua placed in the uppermost tier, the 100% ‘fine’ cocoa bracket. Hmmm… s’pose the fermentation rate also equals 100%. So anyone performing a cut-test with a cocoa-guillotine & spots slaty beans must be sorely mistaken. Cheer up, you paid a premium for it, just convince yourself otherwise & go along with the lords of cocoa who deem it so by undemonizing so.

Full disclosure: the C-spot® itself practices leniency, grading on a generous curve. But 100%? Maybe symbolically.

A perfect score is probably news to the likes of peripatetic cacáo-hunter J. Sandy Hepler (R.I.P), his heir-apparent of sorts Giff Laube, Nova Monda, the Jo Zotter-Horizont Cuvée 3000 venture, plus the Ingemann Group (the latter the brokers of the seed allotment in this bar) among others in Nicaragua. Either that or they're all a foolhardy bunch toiling to find genuine fine-grade select breeds in a countryside when, at least on the surface of such a 100% mark, it’s to be found all around just for the picking.

Then again, yeah, right, OK, the rating pertains to exports only. Still, it infers more than it actually is. It goes right up there with ‘pure’ this / ‘pure’ that. Precious little in biology measures up to pure anything, even so-called thoroughbreds. Ditto 100% except, of course, little boys & girls -- like all of us -- who are 100% pure angels without a mischievous bone in their bodies. Which naturally applies to all children ever born, no?

Once disseminated, next propagated, & the mythos, in the vein of ‘a lie goes halfway around the world before truth puts its boots on’, takes root.

These internationalists can be exonerated however since they undoubtedly enjoy the privilege of never encountering less than fine cocoa from Nicaragua, just as the queen has never heard uttered the word ‘fuck’.

Presumably someone on the ground in Nicaragua, armed with facts & integrity, called the agency out, embarrassed by the over-praise, right? Huh? Anyone? Oh, sheesh, guess that’s what this site is for… for how will the industry change for the better when it fails to take an honest appraisal of itself.

Aroma   7.7 / 10
a novelty act: malted vines
spores & light woods
lays back latex & tobacco
Mouthfeel   12.9 / 15
Flavor   41.1 / 50
alights chocolate starfruit then rapidly darkens into tannic tones & ground fodder / top soil elements without abandoning that front lip… attends to both some buttering & savory agents -> acidity holds aloft, even mounting as a guava analogue, to offset the downward pull of the other sensations
Quality   15.3 / 20
Intriguing bi-polarity. Nothing in the Chuno catalog quite like it to date -- the hi-highs & the lo-lows unique in this particular arrangement of the varietal. Fellow Frenchman A. Morin comes close, though still far from these simultaneous extremes that manage to hang together, dare state harmonize, nonetheless. Practically taste of 2 separate production runs later blended together -- a level of batching with which Chapon probably never bothers. Credit the assiduous fermentation managed by Ingemann's Zoi Papalexandratou.

Call it an internalized marriage, self-compatible heterogeneity. Beams up for the takedown.