Impact
The chocolate world flaps around these days all abuzz over the latest pairings. Most are ill-advised. Worse, they often orphan chocolate off as the poor step-cousin to other "sophisticated" specialties. Chocolate 'n bacon, chocolate 'n goat cheese, chocolate 'n beer &, of course, the overwrought chocolate 'n wine.

Who in their right mind would waste their bar on a bottle? Maybe single-malt scotch but not the simple stuff of grapes. Please. Chocolate for a variety of factors hovers above such inferior goods.

So when this invitation (enclosed below) came along -- pairing it with private jets on an aircraft carrier -- something in the air suggested that chocolate had truly arrived.

Just the perfect accessory for cocktail party fodder: "Hmmm, what are you doing with that extra billion you made last week?"

"Got a new pair of wings. Ideal for jetting in & out of the tropics to take on board some of that wild-harvested cacáo from the Rio Beni. Here, try some."

Emanuel Andrén: Chocolatier to Swedish Royalty... & the unofficial truffles of the LearJet Bombardier 85. 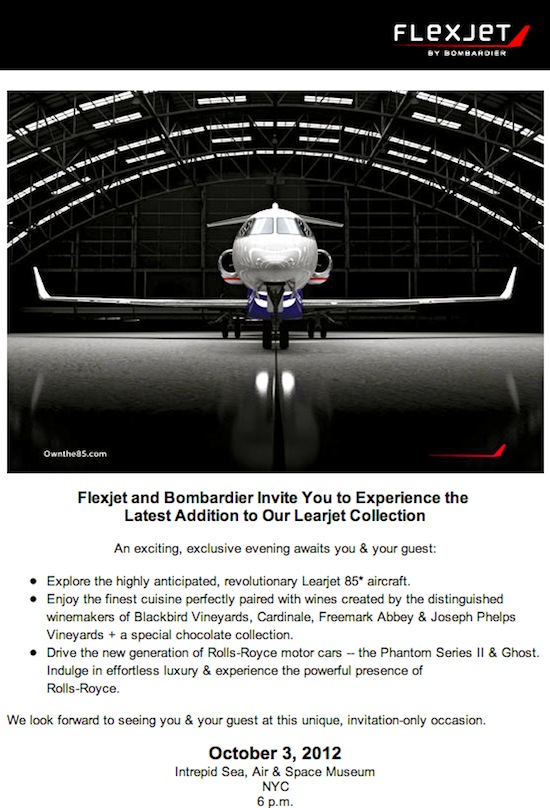 Presentation   4.5 / 5
sheer elegance except for the plastic tray containers (Emanuel, c'mon now, go all in, buck up, & lose those for something commensurate)
Aromas   3.2 / 5
berry composed with back-strap leather & plastic polymers
Textures/Melt   5.9 / 10
Flavor   40.7 / 50
Underpowered couverture serves as fat-lipid agent for Textural FXs.
Felchlin's Criolait amounts to a cream-puff of a Milk Chocolate even at 38% cacáo-content; curbs the intensity levels.
Because of that it seems, incorrectly, that Arden overplays his hand with the infusions which supply most of the complexity in the flavor sets.
Quality   22.8 / 30
Conception trumps execution in this super posh box.

Highly selective, A-1 elements + an absolutely comprehensive listing of ingredients right down to the chocolate type & percentage. Quite rare for the boxed-chocolate category where most never even list the manufacturer of their chocolate base (typically some bulwark like Callebaut or Belcolade).

Sea Buckthorn - another gummy-marmalade, this time with the apricot-inflected Sea Buckthorn set in an MC ganache & a White dome that adds a whole hive of honey to this jelly confection

Calvados - truly one of the uniquities of the world, specifically of Normandy; pomme brandy (distilled apple) reduced here to a cloying confection; slow starter with a bizarre crunch element (a sugar cube), & only a streak of evanescent alcohol overwhelmed by an adipose Milk Choc base that creams its way to White Chocolate taste to mute the proceedings; resolves well enough however on a sweet-cider / betty crumble impression

Laphroaig - cement shell / wet center never comes together until the complete meltdown whence alcohol (thanks to its nutsome barley / peat smoke) vaporizes the couverture (a hyper blend of Valrhona's Abinao & the pre-blend Guanaja) into caramelized-honey tones; proof-positive that whisky & chocolate go together like... well, whisky & chocolate (i.e., love 'n sex) & oily all over