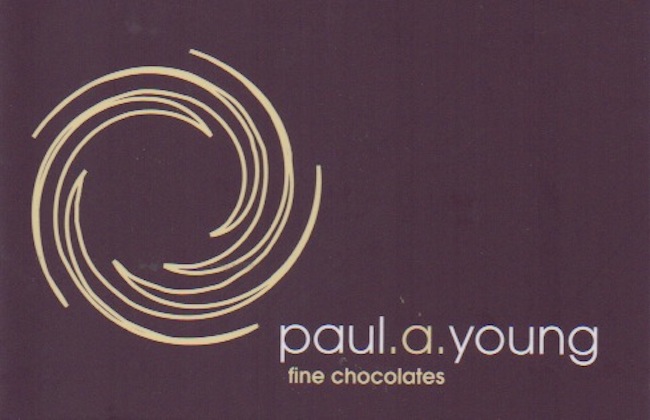 Impact
The shrunken empire, an aging royalty, a diminished 007 & fading rock bands. So what becomes a former superpower slipping into senescence? America beware: apparently churn chocolate fancies among themselves.

Chocolatiers in London enlist in the hype-machine & pass for rock stars in U.K. these days. Take Paul Young. He hobs around the USA with a publicist. Sit down to dinner with him & sure he talks but has little to say. Just as well. His work speaks for itself.

Some promising young talents are 'one to watch'. Paul A. Young is 'one to get'. So what if with his glasses on he looks like Bill Gate's son whom bullies on the playground take advantage of & pile drive into the sand.

No wonder girls rape this guy anyways... for his chocolate.

Paul A. Young is now so hipped up on the bleeding edge of chocolate that even pre-adolescent boys who consume his box while playing single-shooter video games all day long might start menstruating.

Whatever, both sexes – adult or otherwise – can develop a craving for him. 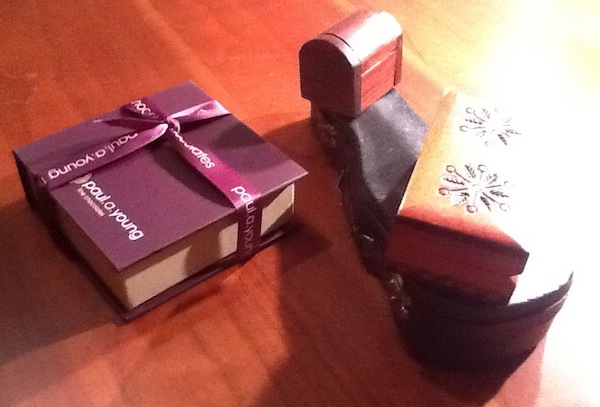 The Book of Mormon may be a Utah cult-fantasy to some, or a Broadway musical comedy to others, but the Book of Paul Young is all serious business. It contains the Word of Theobroma (literal Greek translation 'God-Food')
Presentation   4.4 / 5
handsome; enrobed pieces; pretty tight fit, several with antique finish 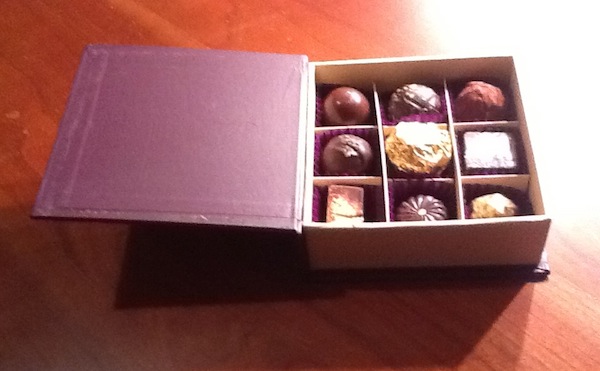 No paper-thin shells; just the opposite. Paul encloses soft & a few rather runny ganaches in some substantial casings to lock-in freshness & prevent leakage. His technique therefore puts the balance of chocolate on the exterior couverture while the centers predominate with the inclusion. The combination yields dichotomy of flavor until the twain meld in the final melt. Hence the prerequisite for patience since the first impression inevitably, & often dramatically, changes during the progression to the last.
Quality   27.2 / 30
A well-spoken, adventurous collection with only minor challenges.

Less experimental than fellow compatriot Damian Allsop nor as forceful as another Londoner, William Curley, this box casts a wider market appeal.

Creative without being eccentric.

Bring able friends to share the choices. Otherwise one risks consuming the entire contents in solitude. In which case, leave room for the Lipitor.

Paul A. Young... 'A' for Adept.
Selections
67% Classic Truffle -- a Palet d'Or standard everywhere else elevated here to new heights... incomparably fresh & loud for a Semi-Dark piece (percentage & flavor the tell-tale clues to Cuizel Ancones), its thick shell seals up a nearly-liquid center, the full combine of flirting-fruit then rolled in a cinnamon-rum inflected cocoa dust; A-List material

Banafee Pie -- gold-foil wrapped to preserve the micro-crust of a crunch, the banana cream fill laced with a layer of salted-caramel that teases of tiramisu, then a flan & finally a banana flambé; multifaceted & quite the convincing shorthand for such a small orb; not since Kee Tong has a comfort-dessert been rolled up into so much serious fun; and, oh, the foil can be repurposed / reshaped to award this a gold star

Espresso Martini -- amazingly seamless contrast of the snapping shell against a center akin to a gel; a weighty cube nonetheless under whose crush the elements (a subtle drop each of Tapped & Packed Espresso + Sipsmith Gin) submerge then sublimate into something that tastes like nothing else on Earth; incredible

Kalamansi - clear as the bell is loud... zzzzzzzzz for zest, zing & zap in a White Chocolate cream ganache; ideal alternative for those living in areas where this tangerine-looking fruit with lemon-like+ taste from The Philippines is unavailable

Passionfruit Curd -- the twin to Kalamansi (above) in both formulation & progression except for the sharper piercing of the passion here &, unexpectedly, a roasted smoked exit from the cocoa element

Love Potion -- geranium dominates jasmine & ylang-ylang to generate a lotion-level rose that struts out but to Paul's credit he curbs it with a Dark shell creating lavender-like lingerings; still, over-pleases in trying too hard

London Gent -- who exactly is that?, inquiring women want to know... a bespoke piece to reflect Paul Young himself? Cosmopolitan, sensitive & nurturing, the new Brit masculinity donning a kitchen apron in the 21st century to replace the mantle of colonial administration so that all the flavors in the Commonwealth on which the sun once never set come home to roost, commingle & get along? Don't let The Rules fool ya... this caramel-treacle enters innocently enough & then sharp black pepper lashes the senses; Young daring & cunning