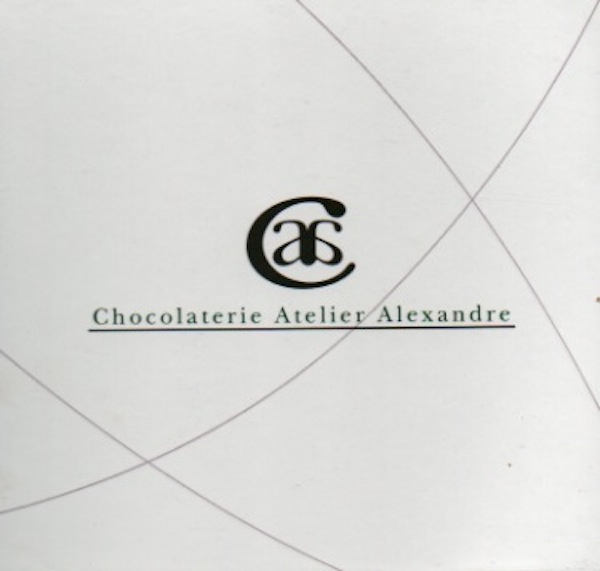 Impact
After so many false starts and promises in the country that ranks among the top cocoa grindings in the world, finally a chocolatier from The Netherlands worth writing about. 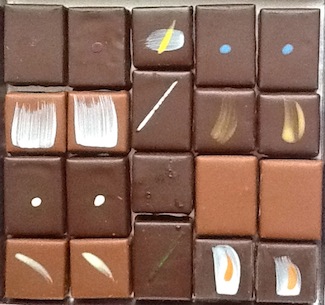 Doubling Down on Most Pieces
Aromas   4.4 / 5
cream, butter & chocolate
Textures/Melt   7 / 10
Flavor   44.6 / 50
soft-spoken / understated infusions, perhaps because of a heftier than usual cocoa-to-cream ratio… generally light-handed, no gob smack… yet nothing left unsaid either
Quality   25.1 / 30
Could stand greater presence / identification of flavorings which in turn will create greater separation between the individual pieces.

Texture, while rather textbook, presents another area that could benefit from added sensuousness. As is, too little spring… it almost sinks into a mealy well.

Overall quality quite high & so highly engineered & precise that Alexandre reminds of pastry chef-turned-confectioner, Bryan Graham of Fruition. Maybe this label should follow in those footsteps & start barsmithing from scratch instead of employing someone else's couverture. (Just a thought / wish.)
Selections
Saffraan -- so deeply embedded the saffron folds into the praliné & the Dark robe that by the finish all 3 dissolve into one another without a trace of each; remarkable / ultra-subtle

Karamel -- straight to the point, then grows on the senses with layers of flavor -- malt, butterscotch & vanilla -- all fused under a Milk Chocolate cloak

Grand Cru Grenada -- the island's volcanic chocolate submerged in a heavy cream ganache with just a tip of plum breaking the surface; studied

Grand Cru Équateur -- one the better expositions on Ecuador from anywhere in any format (bar or bombone); transfigures the origin's classic blackberry hallmark into a red currant under the influence of cream; not revelatory but reformatory

Kongo -- a surprising pierce of the cream ganache by this Virunga-cultivated cacáo, the tip rather citric (blood orange / pink grapefruit); very site-specific & nice exposition of it

Cappuccino -- coffee so easily identifiable & yet so controlled from a setting in a salted caramel Milk Chocolate; a wake-up call in dexterity

Vanille -- expo in Milk Chocolate… gotta like this Alexandre guy for elevating a plain, simple reduction to its bare core

Gember -- a painstakingly slow build that initially acquires a dark honey chocolate gradually easing to a malt lager before a soft namesake ginger reveal; whether by accident or automagick or just Alexandre, sheer brilliance in shimmering procession

Amandelspijs met Citroen -- thin Dark shell (no Snap) hardly a barrier to a very white-looking almond paste of near shredded-coconut consistency punctuated by lemon; quite sweet, somewhat out of character for the rest of the line; easy dessert fare

Thee -- dark, dark… treacle then molasses dark... segues a black tea dipped into forest honey; so clear for so much tenebrosity; haunting

Blond -- nothing could be farther from the reality of this piece; another darksome affair, caramel, promising a "hint of jasmine" , a hint as obscure as phantom French infusions; still excellent… such as it is