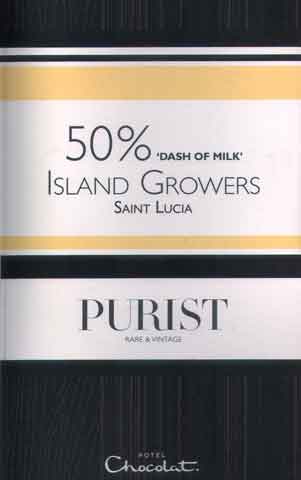 Impact
Post-partum conventionally refers to mother-newborn. It also happens in other milestones of life. Leaving the nest for the first time, graduation, a career-change, a divorce or, perhaps most severely, the separation - however temporary - between star-eyed lovers, especially the tenderly young... aching hearts beating one (whether in unison or syncopation), totally incapable of containing themselves. In dreaded anticipation of leaving, the maiden sleeps restlessly while the suitor watches over, absorbed in complete devotion & involvement of every breath.

Next to hunger, love is the most powerful force in nature – biologically, physiologically & emotionally. When the two (love 'n hunger) join together, the reaction is particularly acute.

This bar feeds the one while it engenders the other.
Appearance   4.3 / 5

This, a big milk for 50% that can stand up to even the darkest DMs & a marked improvement over its predecessor. The manner with which it stays just on this half of Milk Chocolate yet courts the “dark side”, almost pulling it over to convert, where others venture decisively into it & fall prey. Eventually they both bear the other’s aroma inside them.

Those little citrus flirts help, generated with a clean dairy powder, some added cocoa butter & preserved in part thru a brief conche - by Coppeneur standards, the actual manufacturer of this bar, a mere 48 hours - for a bar-smith accustomed to running the machines day ‘n night for an entire work week.

A dichotomy then between the volcanic-chocolate undertow & these vain citrus-caramels endures the length of the progression. Bitterness, though tolerable, just anchors at the base of the throat for measured depth, both literally & organileptically, catching & filtering all flavor-components in a gradual time-release formula (complimented by a dense-pack Texture).

One bar the Dark Hardcore could bite... in between piercing taste-buds with iron-filaments crushed in unsweetened “raw chocolate”.

The whole suite of Island Growers chocolate marketed by HC reveals that St. Lucia as much as its neighbor Grenada in the Caribbean boasts some of the deepest volcanic-rooted cacáo on Earth.