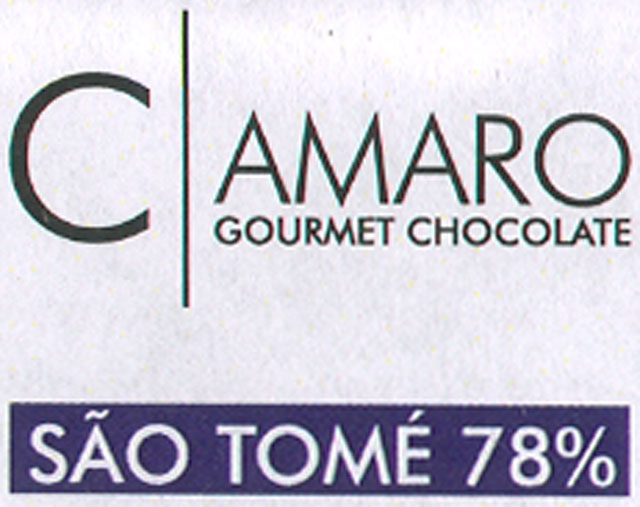 Impact
Time once was when São Tomé crowded the field of "fine chocolate" origins. Part of the standard repertoire where practically every barsmith took a crack at its pod seeds.

Now it feels somewhat left behind in favor of other islands, some with more exotic allure: Madagascar, Sri Lanka, Vanuatu, Fiji, Hawai'i, St. Lucia, Tobago, & even Príncipe (right next door to São Tomé).

This then amounts to a return trip. An "oldie but goodie" in line with the question to the Double-Jeopardy answer "via the hot-button roaster of C-AMARO"... or "What, Alex, is Dionne Warwick singing Burt Bacharach's revised hit Do You Know the Way to Såo Tomé?"

2013: lumbers up a full archetypal ST & falls heavier than a 2x4 square on the nares, basically a cocoa log with raisin punch underneath & a smoldering chemical contrail
Mouthfeel   13.4 / 15
Flavor   46.1 / 50
2011: chocolate grove with coffee & clove -> mushroom woods in the Aroma linger around the background with some faintly liminal sweetness leaning toward red Synsepalum dulcificum aka "miracle fruit" -> cocoa mass + cocoa butter of some appreciable lactose that creams out on those sensations

C-AMARO's heavy roasting, which betrays some other origins, comes good here, both for this particular island cacáo & the rather escalated 78% formulation.

As with its unsweetened Ecuador 100, C-AMARO takes the aggressive nature out of these kernels & places their flavor squarely in a core chocolate profile with very close complements (coffee, cloves & wood).

Far from the most expressive São Tomé -- a bit of a flatliner in fact, further reduced by a 75ºC / 167ºF conche job, in keeping with this maker's general mark -- but this in conjunction with the aforementioned Ecuador-100 shows a certain fearlessness in tackling the higher percentages.

Where some labels thrive in the semi-sweet range (Guittard and Cluizel for instance), C-AMARO may be staking its claim to the very darkest of territories & finding its strong suit there.

2013: ST demands meticulous attention, especially at 78%. Most makers downshift to the 60 percentile & let the extra sugar handle the barking compounds. Not one to shy away, Marco of C-AMARO nonetheless reduces the heat while lowering the boom & just knocks it out.

Sure it volleys forth some prickly tannins, enough to alert the taste-buds, before butter intercepts & balms them into stratified flavor... layer upon layer... until that rather unexpected end point: a resurgent acid.

A bar from an origin that never seems to grow old & tiring but yields a subtlety different dimension with each rendering.