Impact
The following owes to the many who think that history began on 9/11/2001. There actually was life on Earth before then. And real events too.

Take Henry Hudson. He sailed the estuary of the river that now bears his name between NYC & NJ on September 11, 1609. Hmmm, yet another reason why Al-Queda timed its attack when it did?

Or arctic explorer Sir John Franklin. He led a few expeditions to chart the north coast of Canada. Cold country. Frigid in fact. Between 1819 and 1822 he lost over half his men. Most died of starvation, but there was also at least one murder. Survivors ate lichen & even chewed on their own leather boots. This gained Franklin the reputation of "the man who ate his boots".

Franklin’s greatest calamity was his doomed expedition beginning in 1847 during which every single crewmember & both ships were lost. Copper from the hulls’ wreckage ended up in Inuit igloos while some of the human remains made it into a few of the bellies of their fellow crewmates.

This all came to light in 1854 while Scottish explorer Dr. John Rae uncovered the fate of the Franklin party from Inuit hunters he encountered. They told him of ships that became icebound; men vainly seeking to reach safety on foot before succumbing to the elements; & desperate cannibalism because their 3-year supply of canned food was contaminated by lead poisoning & botulism due to poor soldering joints on the tins.

Rae's report caused revulsion back in Victorian England. It outraged Franklin's widow. That she so sought to exonerate her husband led to a couple dozen searches over decades in which more men died than in the original tragedy.

One of those subsequent expeditions, by F. L. McClintock in 1859, recovered written notes & human remains of the Franklin crew on King William Island. Among other items the search team came across were “a little tea, 40 lbs. of chocolate, & a small quantity of pemmican”.

In 1997 Dr. Rae's report was confirmed; blade marks etched into the bones of some crew found on King William Island indicate cannibalism.

If Franklin's chocolate was anything like this bar, whose extremely high cocoa butter content goes well in cold climates without any fear of melting, it would help explain why chocolate -- so legendary over the centuries for its caloric energy values that provide sustenance & stamina -- was rejected by the crew in favor of starvation & cannibalism instead... to Lady Franklin’s lament.

Cuyagua by Choklat: a vegan pemmican of mostly fat & gristle. 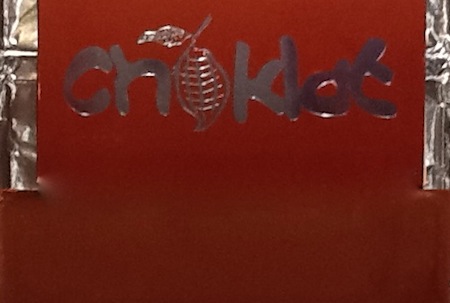 Aroma   6.3 / 10
hard on the heels of that near-butter bandit aka Choklat Porcelana, driven by vanilla for a peanut butter that varnishes up a hardwood
Mouthfeel   5.3 / 15
Flavor   27.1 / 50
vanilla-cream with wooden undersiding -> waxes rubber 'n butter -> vanilla-flavored bubble-gum (kinda rare & in line with the Texture) -> butter-soft vegetan (vegan leather) -> wafers -> almond skins
Quality   3.9 / 20
The tasting notes on the package read like the stuff of novel fiction ("apricot, honey, caramel and other spices"). On second thought, yes, vanilla-induced caramel; vanilla also qualifies as a spice, & dirty honey appears thanks to vanilla-butter.

Comparing this to other Cuyaguas (Amano, Pralus, or even S-B's Cuyagua-based blend) approaches sacrilege for those are the genuine article whilst this a mere artifice. The difference between real chocolate versus chocolate-flavored butter, or pure gold vs. alloyed gold.

As such, this only brooks comparisons with itself -- specifically, Choklat's 2010 version. Even by that score it's losing. At least 2010 exuded some minimal semblance of chocolate with fruits & spices.

The travesty here accomplishes the self-same effects as alkalized cocoa: stripped & denuded of any character.

Where's the chocolate, for instance? Entombed deep within vanilla-overkill (enough so to create some bittering) & butter strangulation.

Choklat should just drop the pretense of single-origins & varietals & man-up in favor of a generic label on all its bars that more accurately & boldly describe them: lard.