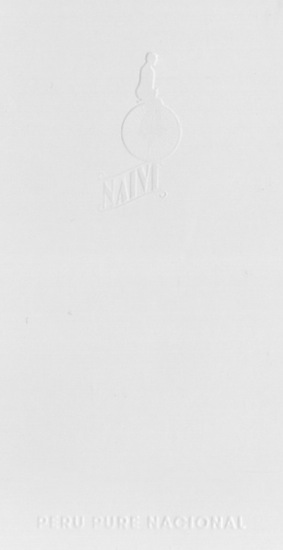 Impact
The White Album of chocolate (yes, that's the wrapper image to click on the right).

And, no, not because Domantas Uzpalis of Naive thinks there's some retro-Revolution going on Back in the USSR, close to his home in Lithuania. Or life's all Ob-la-di, ob-la-da. Nor does he suffer from a certain blues guitarist's sweet-tooth for Savoy Truffles.

Just call him Mother Nature's Son, tickling himself crazy with these cacáo seeds -- the offspring of the mother tree that gained fame as Fortunato #4. Thus so enthralled, he writes fables & fantasies about them for his liner notes.

But to paraphrase a lyric about another mother: half of what he says is meaningless, but he says it just to reach you.... (Ditto this very website.)

The other half naturally conveys pure truth.

Finally a barsmith grants this site's wish to ramp up the cacáo-content on the origin. The only bitter disappointment -- in a nearly bitter-free chocolate -- stems from that it took so long.

Compared to French Broad's version, this feels over-processed however & rubs out much of the finery from a delicate cacáo. Yet the pedigree remains undeniable to shine forth.

For instance, Naive toasts it but the bar still renders a rather Piura white countenance.

Also, 60 hours in the conche here versus 20 hours at French Broad explains more than just the ultra-luxurious Texture. It means every flavor aspect becomes indeterminate / indefinite while this bar searches the subliminal recesses. Ergo, the ambiguous descriptors. It's all back there though... hovering.

Consider the astringency, virtually none to begin with, except a faint influence at the very end. Even the scant bitterness tastes refined. The flirting fruits; the savored herbs, & umami moment. All just micro-dots.

A bar that hums quietly & rides the slow lane along a core chocolate rail of sustained continuity. Multi-taskers who walk briskly, talk rapidly, & cogitate faster than both of those activities combined won't get it until they halt the mindless typeractivity & tiny pinterest & take it in. Ahhhhhhhh, bodhi consciousness has its own rewards.

Short of great this Peru Nacional... in the vein of the Good 'n Evil version of this origin... & no shame in that. Just the opposite. Marañón starting to shadow Chuao in that, while someone can do harm to it, it can practically do no wrong thru it.