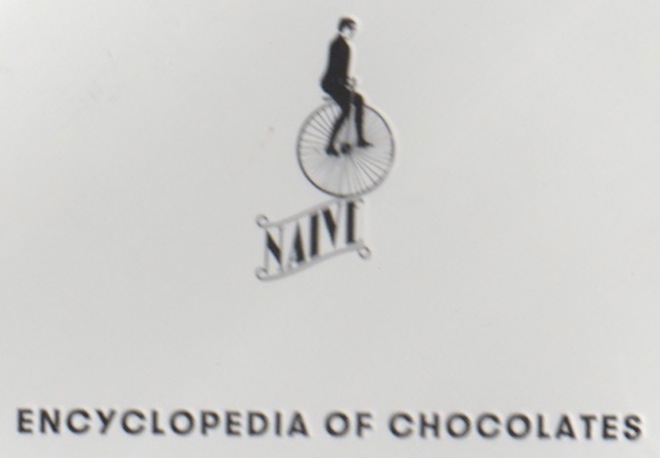 Impact
The Grand Tour of Chocolate, wending thru cacáo origins with stops at each destination, counts but a handful of trekkers... far fewer than climbers up Mt. Everest at any rate... starting with Bonnat's Cru line in 1984, then popularized by Pralus' tasting pyramid, before Coppeneur, Bessone & some other chocolate explorers joined in.

Domatas "Naïve" Uzpälis, still relatively new on the circuit, takes it up a notch in a different direction. He voyages to several -- witness Peru Nacional, Trindiad & Tobago, Java & even Uganda -- though by no means all of them. That might come with due time.

In his variation on the theme, he references complementary & contrastive inclusions in tandem with origin cacáos, all from the cozy confines of his village chocolate library.

Less a whirlwind excursion & more a venture around tasteful gastronomy... going for the knowledge, in-depth, to discover what works.

By releasing this encyclopedia, full of textbook execution & combos at one remove from the beaten path that never stray from it, he stays close to the roots while still compiling a tour de force.

The following is a summary of confections that fill the slot between a bar & a bombone (the shape of the former & usually the taste of the latter). In the 'Flavor’ Section below, individual confections are listed with a brief synopsis of each. The general rating (at the upper right) reflects their composite average.
Appearance   4.6 / 5

Aroma   8.4 / 10
Mouthfeel   13.2 / 15
Flavor   45.5 / 50
Dark Chocolate with Sugar Crystals -- Naïve advertises a light roast, if so blame a faulty temp gauge... quite dark in physical color & flavor tone; a relatively short conche by Naïve standards (45 hours) imparts major benefits for this cacáo from Barinas in Venezuela's southwest.
As the name suggests, coarse sugar which usually means 'get ready for some interactivity because, yes, you complete the process' but, in another case of questionable advertising, the crystals feel fresh crushed, & too the whole bar.
Really sows its oats on the nose; a different story on the tongue, however, as raisins & coffee transforms into coffee poundcake, then gingerbread, & finally a cream-cherry ending; one of Naïve's best, & deserving of its own separate review.

Dark Chocolate with Forest Honey -- like water & oil, chocolate & honey supposedly don't mix... let the cocoa physicists & chemists explain that to Domantas Uzpälis of Naïve who widens the gates of possibility in blending them together, defying principles of water activity & availability.
Another oatmeal / raisin scent (sumthin in the Lithuanian air there which cocoa butter absorbs or just the butter itself?) but heavy clover / alfalfa honey drizzles on the nostrils; + another "light" roast with flint sparks.
Slightly granular despite 60 hours in the conche.
Initial sweet bread quotient to the Flavor until honey streams beneath Madagascan cacáo's own appreciable fruits points.
A bit twee sweet (67% cacáo-content) but the final flourish justifies the formulation in this well-studied pairing that sums up into a wild flower meadow.

Milk Chocolate with Salted Caramel -- stunning head-turning color: cinnamon blonde topaz.
A gamy rendering with a blade of lemongrass... slow to start, then this bar just kicks the bucket over.
And, oh, that Texture: straight from the teat.

Milk Chocolate with Hazelnut -- in add'n to obvious hazelnut, this contains a wheeze of fried chicken, yes, KFC in a bucket... hmmm, sumthin 'bout the dairy in Lithuania again... maybe chicken milk?
Cream the first thing to hit the taste-buds, followed by soft filberts, then the papery nut skins, goes deeper to its meat, & deeper still to its oil, each layer framed in subliminal cream; A gianduia so absolutely native that given how the finest hazelnuts grow in the Piedmont area of northern Italy, the inhabitants there may want to make Domantas Uzpälis of Naïve an honorary Tuscan
Quality   18.1 / 20
Practically all-winners.