Impact
A year on since Mott Green, one of the bright lights in the chocolate firmament, has died & this post, originally prepared last summer in his wake, has sat unpublished. It conveys what’s fondly referred to around these parts as Mott’s Last Chocolate Will & Testament.

A meeting of the editorial board decided to publish rather than let it languish perpetually.

They're in the sky right now -- Mott

Within 2 hours, he was suddenly & unexpectedly dead.

In the days leading up to his death, Mott & this office exchanged a flurry of IMs. It all started with a project to catalog the prized flavor cacáos of the world.

Ever since Grenada Chocolate Co.'s 100% unsweetened bar &, moreover, its Nib-i-licious scored high ratings a couple years ago in The Chocolate Census, cacáo on this island has been commanding attention.

Mott was therefore contacted for his assessment of Grenada's various cacáo orchards & estates. He singled out one particular property as la crème de la crème / the best-of-the-best.

Great. Send some, please. He said 'no problem'.

A couple weeks later, the parcel had yet to arrive. Mott explained that he wanted to mule them himself on a trip to the States at the end of the next month. But once he understood the urgency, he agreed to FedX it.

Another week flies by -- nothing. Mott then complained that FedX would cost $50 to $100. "Fine, just put 'em onboard & you'll be reimbursed."

A proud squatter in his former life in NYC & Philadelphia, no doubt Mott could be frugal. And maybe the economy was still in recovery but, c'mon, let's get this done.

Another phone call. To expedite matters. he was offered a credit card or PayPal. Then the plea: just send the effin beans.

The tone of the conversation turned a little tendentious. Mott snapped, "Dewd, don't you understand? To send 'em FedX by themselves instead of me bringing them as carry-on luggage creates a larger carbon footprint".

"Jesus, Mott, good thing God or evolution didn't pick you for Adam on the original childcare delivery or else none of us would ever be here."

After some more verbal sparring & bumping each other around like brothers, we hung up.

It's hard to argue with such fanaticism (stated here with affection). Remember, his company practices Sustainable Delivery… certain payloads of their bars are shipped from the Caribbean to Europe via the ancient mariner route: harnessing the power of the wind on a sailboat... a pre-steam engine move in the age of aviation. That truly & literally enjoins the slow food movement. No doubt he'd probably swim them over if he could.

Uncompromising in his standards right down to the last nib, Mott embodied “chocolate energy” from his first commercial bar. Even at 60%, hardly a superpower percentage, it was the little bean that could… & did power up the Grenada Chocolate Company, which pulls cacáo from several local properties — about 200 hectares in total – each a shareholder in the venture.

Collectively their organic pods consist of mixed cultivars, some inter-cropped & others of pure-stand cacáo under shade-canopy. By the time these reach the company’s centralized fermentary, they merge into relative uniformity inside a solar-powered manufactory that processes the whole blend & keeps the valued-add at home to complete the vertically-integration, a pioneer among the micro-processors of premium chocolate. Its family of 50 islanders who toiled alongside him is a testament to what they envisioned together: a grassroots movement on the up, without the skullduggery & stealth that mars so many businesses. Well beyond fairtrade, organic & the raft of certifying regimes, it's home-ground chocolate at its fullest.

It wasn't about the money; it's about enacting a creed faithfully.

True to his word, the following morning, his last, Mott delivered that message with the subject header They're in the Sky Now, detailing

"ok, I sent 3 kilos from the 1 grove, as discussed, on a plane with our Prime Minister Tillman Thomas. He happens to be our friend & neighbor here at the chocolate factory. Please call him to arrange pickup." Then he closed with "Enjoy analyzing the best chocolate in the world, perhaps."

A couple hours after sending this, Mott Green, supporter of this site &, moreover, friend of the Earth, was accidentally electrocuted while upgrading the factory where he worked & lived.

Mott, if you're in the sky right now, damn the ratings, such as they are, always ephemeral at best, this, at least symbolically, earns a perfect 10.

You're heirluminesce... may your soul be well-kept & long may your memory live for the example you set.
Appearance   4.4 / 5 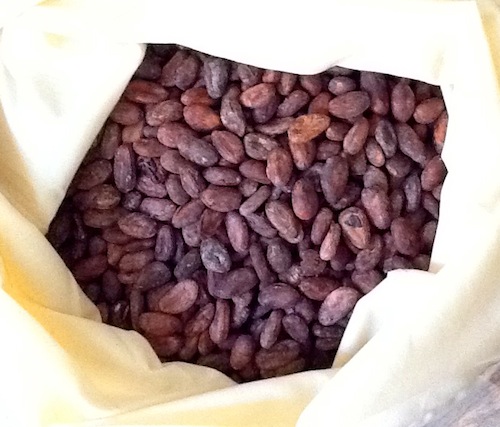 Proprietor Kim Russell of Crayfish Bay tends to this 200 year-old, 15-acre estate overlooking the NW coast of the island. A former molasses plantation during French colonial rule, he now husbands these beauties during a fermentation-drying continuum that lasts upwards of 2 weeks. The combination of some predigreed cacáos & favorable terra account for its standing out from its neighbors that make up the bulk of the Grenada Chocolate Co.'s supply.

Exceedingly well-mannered yet dynamic for a raw cocoa nut. Low acidity replaced by medium-hi umami & ungrilled vegetals. Makes for a solid bar of core cocoa principles complimented by savory-sweet highlights (eat up those vegetable & chew gum at the same time), as evidenced by Barsmiths™ Grenada 75%. And those bubble-yum aspects translate into deep purples in Pump Street's sweeter 70%.