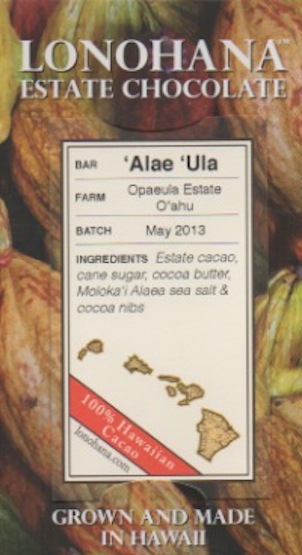 Impact
Good God almighty 'devilicious', to use a term wickedly close to one on the C-spot's® List of Banned Words.

Senaca Klassen at Lonohana continues his improv act of magic tricks, tossing Nibs & salt willy-nilly into the mix with his impish grin of 'aw, shucks' shrug-of-the-shoulders 'I dunno'. Whether dumb-luck or brilliant liar, this guy's a Chocolate MIdas with a golden touch.

Here's what is known: salt really enhances & elevates the flavor in a paradoxically downwind spiral... toward the ground & subterranean folds of volcanic chocolate despite a relatively high sugar load (approximately a full third).

Its ocean liner of trace minerals, plus mellow taste with a buttery note, contrasts to Black Salt (see Domori's Sal & Trader Joe's Caramel). Alaea gets its color by adding volcanic clay (high in iron oxide) to unrefined sea salt. Nanea, another barsmith in Hawai'i, also employs it, though to far less dramatic effect.

With a spate of chocolate coming off this island at an increasing rate in what amounts to a cottage industry cluster -- mostly upstarts still learning the ropes -- Lonohana clearly distinguishes itself at the front of the class.