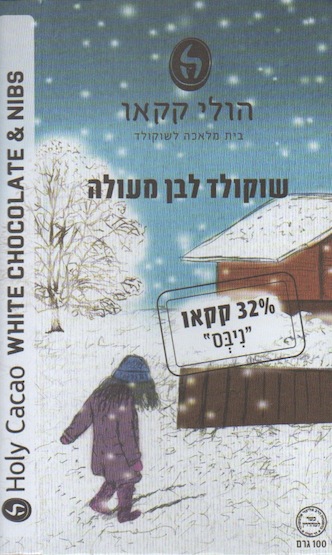 Impact
UPDATED / UPGRADED REVIEW: The following review features Holy Cacao's White Chocolate with Nibs from 2013 utilizing Dominican Republic cacáo and its 2016 release highlighting Marañón Canyon, Peru cacáo. Overall rating at upper right reflects a composite average of both.
*********************************
A chocolatarian approached the Oracle of Cacáo -- Ted Broman -- for an audience the other day.

A chocolatarian™? What's that, you ask?

Someone who in the company of straight society fakes that they eat a balanced diet of the 4 basic food groups (while ruminating deep inside that those 4 comprise equal parts Milk Chocolate, Dark Chocolate, White Chocolate & Filled Chocolate). But amongst their own tribe -- other chocolatarians who identify each other in secret by their permanently brown-stained taste-buds -- they concede a hapless chocolate-limerence… an all-consuming / all-possessing bond & attachment to all things chocolate, 100% of the time. Confined essentially to a chocolate life-sentence without possibility of parole. And they luv it for that special "chocolate energy" which fuels their wild desires & violent cravings.

This particular chocolatarian inquired of Ted: 'O, Oracle, when presented a bar of the food of the gods that contains both smooth chocolate AND rough Nibs, what's a poor mouth to do, chew it or let it melt upon thy tongue?'

Ahhh, to chew or not to chew, 'tis the ancient question of chocolate modernity.

The Walrus said "goo goo g'joob" in reference to a baby's natural instincts (after Mother, bodily intelligence knows best), later picked up by Lady Ga Ga. But some cocoa gurus preach the old skool 'right vs. wrong' catechism when it comes to taking their chocolate.

As explained by Ted on a few pages of this site, a regular plain Dark chocolate bar often delivers flavors along a primary axis -- either vertical (as a layered stack) or horizontal (as a linear progression), a conveyance somewhat dependent on whether one chews to speed up the process or allows it to melt at its own pace.

Ted beseeches "at least some chewing because, with rare exceptions, Nibs do not melt. Further, if one eschews to chew then there will be little-to-no-blending / integration; only segregation. In the multicultural world of diversity, inclusiveness is good for the body politic & the soul of gastronomy. Try this: experiment with different timings between the chew & the melt & judge for yourself."

Wow, what a radically novel idea: empowering people to choose. No dogma, no indoctrination; just trusting the folk.

He goes on: "softly bite or chomp just once or twice to start the chocolate's release (which shouldn't really engage the Nibs much at this point). Then gauge just the smooth chocolate's Texture & Taste (for a short while), & proceed next to chewing for an appreciable admixture of chocolate + Nibs together. Once they're fairly well blended, let the melt resume until... toward the finale when residual Nibs start to outnumber everything else. This method is called Chelting, a portmanteau of chewing + melting."

Marañón
butter-on-butter (cream & cocoa)
pure
Mouthfeel   13.3 / 15
Flavor   46.7 / 50
D.R.
Nibs rack in, with good pure chocolate bite of hi-CQ, loud & proud / strong but not long (altogether rare for the format, chelt or no chelt)… White Chocolate back up, then grooves 'em quickly with some salt-like FXs + glutamates before overwhelming the profile -> 1 scoop of that forecasted vanilla ice-cream (thanks to chelting) -> once the butter melts thru & liquifies, vestiges of Nibs stage a comeback, this time round as an Almond Milk Choc bar (superb)

A bar that on the surface suffers from bi-polar disorder -- accelerates zero to a hundred... in one single swipe -- taking the extreme polarities of the chocolate spectrum -- "devoid" White Chocolate & unadorned Nibs -- but by end times behaves in accord with its various complexes in knowing itself.

Except for that stretch where cocoa butter dominates (still pretty good considering its savory base -- Holy Cacáo's White Chocolate without Nibs -- though none of its off-putting aromas & shockingly smoother here perhaps due to the Nib contrast) which almost vacates the profile however temporarily, this sits right on the lip of perfection.

Marañón
A Great White that just got greater. Nitro-chocolate in spite of its whiteness. Among the finest ever for the category.

No one goes deeper / darker / denser than Jo Zander. Holy Cacao, damn straight. As if Zander the Occultist travels all 32 paths in hitting every sephira on the Qabala's Tree of Life (in Hebrew no less... as with Sanskrit for the East, the sacred language of the West -- click image upper right to enlarge text) which, in his case, stands for Theobroma cacáo (ditto ancient Americans who originally harvested it), tickling the ultimate taproot for flavor.

Beyond that, the label progresses with its own land in Peru, growing 3 different varietals + a native type. Small harvests to date but expect the same careful stewardship that marks these bars to carry over into the cultivation of cacáo.