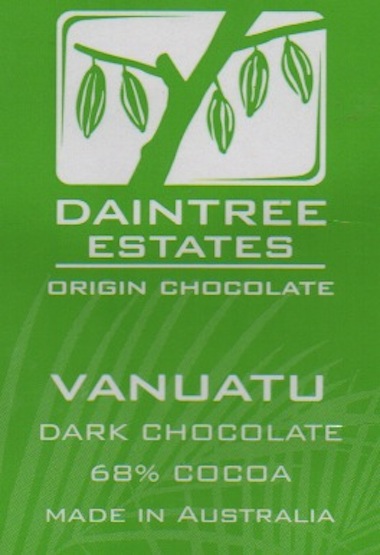 They find very little & bring back just some mishandled trinkets.

Perhaps heeding suggestions & following fashion, Daintree loses the lecithin & vanilla that marked their earlier releases so prominently. This bar could use some of each (oh, the New Puritans of Cocoa shake their heads in reproach) for both Texture and Flavor suffer from a lack of them. Then again, they'd serve only to temporarily mask the inevitable: substandard cacáo-prep aggravated by uncontrollable smoke in the drying of these seeds to rival PNG on its more volcanic days. Many Vanuatu growers employ kiln driers & polypropylene sacks.

Including the cooking at the manufacturing stage, the combined roasting level for this bar tastes beyond well-done... but overdone. An eerie reminder of another Vanuatu processed in Australia by Cravve (are they sharing the same shipment?).

Let's be clear (since this bar isn't): there's nothing wrong with "smoked" cocoa per se except when it becomes the dominant or, worse, lone feature.

Realizing such, Daintree makes the understandable choice to mix in raw cane sugar, & a fair amount if it, to color / cover these cocoa nuts with raw cane's inherent molasses. A copious butter pad then attempts to smooth & entrain the compounds with, alas, limited success. Very much the stable mate to Daintree's Milk Chocolate from Vanuatu.

No matter, just as with every child, just about every chocolate possesses some redeeming value. Ditto Daintree's Vanuatu: that fraught beginning melts its way thru the troubles to resolve with some aplomb in the end.