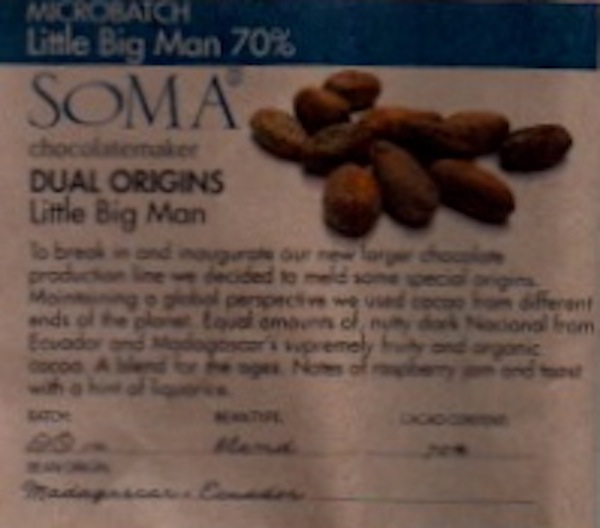 Impact
Chocolate amounts to fiction. It does not exist in nature except for being man-made.

On that premise, let's presume Soma Chocolatemaker christens this bar after the title of the comic Thomas Berger novel, later made into a film starring Dustin Hoffman as Jack Crabb, rather than the real-life Little Big Man aka Charging Bear -- an Oglala Lakota implicated in the assassination of Crazy Horse in 1877.

As such, & in keeping with the theme of the fictional work, this bar represents a personal act of handcrafted resistance to the digital artifices, 3-D printing, mass-production product & the impending final invention that will mark the end of people on the road to their own nowhere.

Aroma   7.6 / 10
recoiled, even vacant, at first: light cocoa dust + chicory -> struggling spice quotient
aerates nut woods + tea leaves
Mouthfeel   13.5 / 15
Flavor   46.2 / 50
sweet citrus behind a streamline chocolate lip (smooth walnut fudge) -> acidity comes fore… first pineapple… then grapefruit -> brief but hard buckwheat (a bit bitter but savory too) -> tartens considerably on cranberry (by now obvious Madagascar) -> sweetens some to raspberry against that tea picked up in the Aromatics -> rolls up all the preceding tang into a fruit cocktail with hazelnut oil (tastes [even] better than its sounds)
Quality   18.3 / 20
To Puritans hell-bent on "single-origin" bars consisting of cacáo nuts & sugar only, Soma counters by blending a couple origins soldered together with added cocoa butter (a no-no according to purists). Purity may have its own rewards. Few of them preferable to this "deliciously wicked" bar.

A blend featuring 2 of Soma's best individual chocolates -- Madagascar & Ecuador -- fused into one. The math indicates adding them together equals a sum total, or perhaps even greater. But sometimes admixtures complicate the factors.

This essentially Soma's version of Wild Bill Hickock meets the Soda Pop Kid. Anyone who ever read the book or saw the movie knows the Little Big Man is before long a bucking stud rolling 3 sisters in a single session. Ecuador fills that role here but decidedly as a bottom. Which leaves Madagascar's bevy of tarts well on top. So in reality Soma plays the role of Little Horse -- the hee-man-eh or 2-Spirit / transgender.

Either way, profile if not actual weight clearly favors Madagascar. Lots of fruit punch. This bar could realize an even greater force field by boosting the contribution of Ecuador in the mix.

Notwhithstanding, these dual origins sit & settle quite agreeably, almost seamlessly, in an amalgam of high / brassy Madagascar above the bolder / baser foundation of Ecuador which tethers the upper register in core cocoa groundings. Very much a now-conventional pairing, sampled prior in the likes of S-B's Kumasi-Sambirano for starters, utilizing Madagascar & Ghana for the same purposes, to Soma's own 2009 blend of those same African countries.