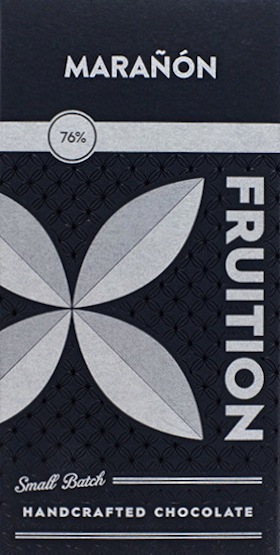 Impact
REDUX REVIEW -- below are segments of Fruition's Marañón Dark, initially released in 2014, followed by a refresher in 2015, as well its later Milk Chocolate offspring. The rating reflects the upgraded batch -- a chocolate that marks the further ascent of this barsmith.
*****************************
The opposite of divorced & pregnant: married from birth
Appearance   4.7 / 5

2015
florals & acids blown off fast by livestock & a roasted element

Marañón Milk
slides in true to the Aroma, the chicory at times bending toward coffee -> backdrop fruits (never telling, just teasing) -> subtle butterscotch -> eases to the finish over apricot marmalade & floral chocolate
Quality   18.3 / 20
2014
One of the rare Marañóns that possess appreciable high & low ends -- both bottom & upper registers.
Quite the dark countenance, indeed, to tether those lofty tags. The contrast makes for interest in this bar. An ebb & flow between downcast & uplift. And without the obstreperous treacle tones which plagues recent harvests of both this micro-origin specifically & northern Peru cocoa generally.
For such a delicate cutivar, Fruition customized separate, quasi-proprietary blended batches -- multi-variegated / multi-tiered & staged during the processing chain -- then later conjoined for the finished bar.
All together it takes the act / art of manufactory to a higher level.
INGREDIENTS: cocoa mass, sugar

2015
Another batch & another advance.
Marañón cacáo ages better than just about any other. Like all chocolate its compounds round with time but unlike most they also gain definition.
Fruition just aces it down the middle. Arguably the finest Marañón Peru Nacional to date. For a label boasting several master-cuts, this augments the list & further elevates it.
INGREDIENTS: cocoa mass, sugar

Marañón Milk
68% cacáo-content
Hefty Dark-Milk at virtually a Dark Choc percentage.
The 1st Milk Choc utilizing Peru Nacional cacáo out of Marañón Canyon.
One of the limits to Peru Nacional is that it lacks, in the main, core chocolate flavor (or lo-CQ / baseline cocoa notes). Fruition inadvertently (or intentionally given the insights of Bryan Graham) discovers a way to consolidate & extend the chocolate entrance in the Dark via milk, for this bar manifests the most base chocolate of any Marañón yet, all the while retaining the traits for which it gains renown.
Score another Dark-Milk blockbuster for Fruition after its successes with Costa Rica & San Martin.