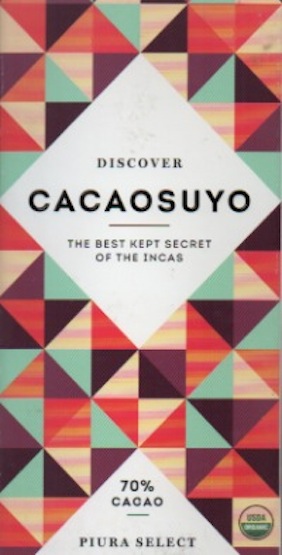 Impact
From the land of Mario Vargas Llosa & magical realism.

The implied (or, let's say, the explicit on the brink of illicit) fruit in this bar is ridiculous.

The auto-tune of chocolate bars.

Aroma   7.8 / 10
arid as Piura itself… parched white laurel bark… barren save for a dried aguaymanto (aka Peruvian groundcherry aka golden gooseberry) that gets sappy quick -- resin / treacle
rear tea
Mouthfeel   10.6 / 15
Flavor   43.4 / 50
tart parting of the tongue --
golden treacle on one side / golden gooseberry the other -> concentrates into marmalade -> underside of white laurel to create a dry finish
Quality   16.7 / 20
One dimensional but an inviting one. Lopsided topside. The profile so bent in a single direction to feel distorted.

Another of Cacaosuyo's juice concentrates at such high express levels to wonder just which of the Inca gods in Peru rains down on these seeds. No prior Piura bars ever exhibit so much expeller fruit. The closest contender -- a distant second: Patric's. Next to this, Pacari Quemazón tastes dilute & Amedei blank.

Doused as though pre-sweetened & flavored cacáo pulp was collected rather than fermented & simply poured into the mix. Doubly so considering the rather pale color which implies a recessive pigmentation gene that often equates to quieter flavor tone.