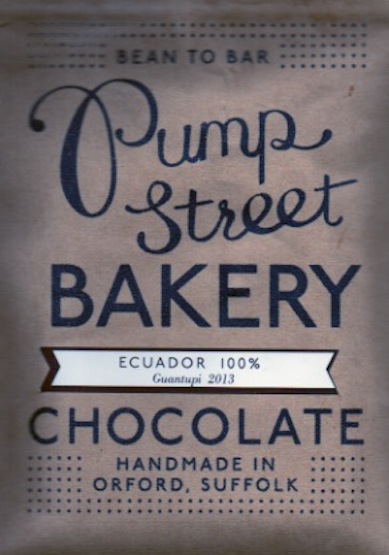 So far, only one.

Most recipients thank their mother, their spouse, their God, their ego.

But a bakery? How good is that?

Apparently good enough to trump the Oscar itself.

In February 2015 a Brit film-maker felt… well, verklempt over winning that prized gold statuette because, he managed to get out, it entitled him, Wonka-style, to a free donut at Pump Street Bakery.

After sampling this collection here, ah huh, yes, just stick the Oscar somewhere on the mantle over there, please, & pass the chocolate.

The result: daring high-chocolate with creativity employed merely to attain it.

Pump St. stretches people’s expectations & imaginations of what chocolate a) is & b) can become in its various malleable forms. Nothing quirky or twisted about expanding the thresholds either. Quite the opposite: it feels relaxed at a natural pitch. Not necessarily great in each & every case but certifiably original.

Many may boast such claims; far less back them up. Count Pump St. among the precious few.
Appearance   3.7 / 5

Honduras
another wild signature unique to Pump St.
try this on: malted raisin-kraut! (to be expected from a former cattle ranch at the cacáo origin?)
settles some into a more orthodox pose

Madagascar 72%
among the benefits of a multi-bar review: gleaning the commonalities / constituent traits of a barsmith more readily
yet another raisinous-palm production by the Pump
lifts up with time to a drafty sea breeze

Rye, Crumb, Milk & Sea Salt
similar Texture & start as the Sourdough (above) but more breaded / toasted with rye providing a deeper grain to the passages, further enabled by a Milk Chocolate base -> slight lemon rising
Quality   18.9 / 20
Ecuador 100%
Hacienda Limon, Guantupi, Los Rios, Ecuador; Vintage 2013
Everyday flavors, almost straight from the oven at a breakfast deli serving bagels 'n lox round-the-clock yet damn uncommon for a chocolate. Doubly so an unsugared one. So foreign in the sense that it bears virtually no resemblance to the Heirloom III cacáo from which it derives. Indeed, this tastes as if from anywhere / everywhere, created more than crafted, incubated in a lab instead of a ferment pile ala Camino Verde's manipulated starter cultures, in this case inculcating the highly impressionable added cocoa butter (& copious amounts of it) with investigative zeal. After all, Pump Street is a bakery. Ergo naturally it bakes up a yeasty loaf… errrr, bar Less a baker's chocolate & more an experimental compound.

Venezuela 75%
Patenemo
Very Venzy but recessive… as though Venezuela faded off the map after the political situation there denudes the country of its resources. Excluding early Mast Bros -- about a thousand bars ago -- nothing from the Patanemo area matches the origin's reputation. The aft-linger however haunts of the promise of what could / should be.

Honduras
80%; Batch 5202
From Finca Tres Marias -- a 30 acre parcel enjoying the support of the NGO TechnoServe.
Mimics in some aspect the treacling bars of recent vintage northern Peru. But quite distinct. Off-balanced for sure. Little in the way of baseline cocoa flavor. And almost sickly sweet for an 80%. One of the sweetest at that percentage. Once more a generous butter pad spreads out the sugars, distributes them from concentrating too much.

Madagascar 72%
Just terrific jam, literally & figuratively. Atypical for Madagascar. This too inclines toward fruit concentrates -- an emerging house-style -- instead of the usual bright red tarts for which this island's cacáo gained renown.
Where some of Pump's output verges on the eccentric, even freakish to some, this subtly yet significantly re-interprets an overexposed chocolate destination. Excellence re-defined.

Sourdough & Sea Salt
Almost incomprehensibly good.
The most noble employment of Patenemo cacáo to date (see entry above).
So deft… the additives so considerate, never intruding / interfering in contributing to the holism of the bar which, at its core, abides in chocolate. They synergize Patenemo to exceed itself in ways heretofore unimaginable. A bar embodying brilliance.
Obviously Chris Brennan of Pump St. knows fermentation from his bakery expertise & cacáo's a fermented fruit seed. They shape-shift on one another, essentially to a match, lighting each other up.

Rye, Crumb, Milk & Sea Salt
Batch 5102
A mouthful of a title & a taste.
Sweeten up the Guantupí Ecuador 100% (above) substantially (just 60% cacáo-content), add rye 'n wheat crumbs + a dash of sea salt in Milk Choc & it all ramps up Sourdough+. The same superlatives hold here as with the previous bar (immediately above). A few more of these & next year in Hollywood they'll be handing Chris Brennan an Academy Award for best documentary in good taste.