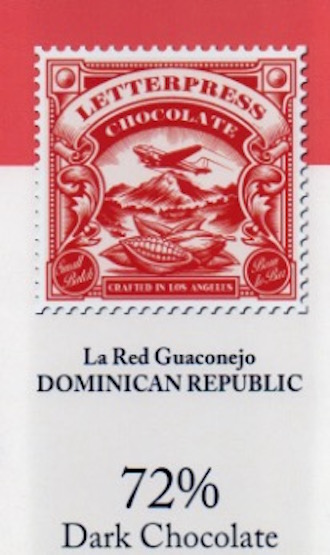 Impact
H. L. Mencken saw an idealist as one who, on noticing that a rose smells better than a cabbage, concludes it also makes better soup.

The odor of these bars also belie their treasures within, to throw sniffing choco-hounds off their trail... then ultimately drawn back on it because, hey, it's chocolate &, more importantly, the end flavor (particularly La Red Guaconejo).
Appearance   4.2 / 5

Kokoa Kamili
as though direct from the Tanzanian countryside, the flora & fauna encapsulated herein, in a bar… the leather, the dried herbs / spices & grasses, dirt & earth… all there

Kokoa Kamili
translates faithfully from the Aroma with pops in an early fruit tang (tamarind, including a mild detergent of the self-same character as Marañón [above]… hmmm) -> settles on dried sap & resin shadowed by the anise-like Pinus patula -> late lychee (real nice) -> bitter nut (call it marula kernel)

Knowing this varietal, the color reflects a hearty mix of pale & purple seeds.
Once the raisin vanishes, the bar slips way upstream, practically untethered into the fruits & florals (+ possible solvent) with no balance to bring it back save for the chicory aftermath.
Generally correct prep & process (excepting that soap bubbling -- a rinse issue with the moulds?).

With so few Kamili bars on the market, the parameters of this regional cacáo are still to be fixed but already the early general curve shapes up: opening fruit pop, nut close, & moderate cocoa base. This here less ornate than Palette de Bine, falls more in line with Middlebury. The 3 together, along with Kokoa Kamili's own sample, shows that Letterpress reads these seeds accurately & crafts accordingly.

Near classic rendering of the now-defunct La Red co-op introduced to the premium scene by Mast Bros in their early heyday (strange how that went) &, with this strong closeout by Letterpress, the 2 bars bookend bold, noble flavors that contributed to putting the D.R. on the cocoa map.

Capsule Summary
Fairly true to type... the origins / the cultivars... exhibits a respect for the elements in generalized dark tones that transmute core chocolate tags into deeper hues & saps.