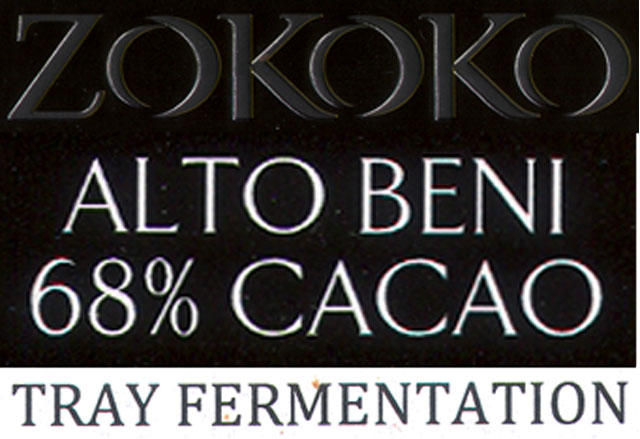 Impact
Everything in chocolate is situational. Which may explain why so many experiments abound in it.

Some for instance illustrate the effect of roasting. Fresco promotes bars that highlight that difference using the same seed from a single-origin cacáo. Others conduct variations in conching, most notably Coppeneur and Felchlin, to let on how that changes flavor.

In a chocolate first, Zokoko along with Volker Lehmann of FVB (Frontier Ventures Bolivia) bring together a twinned bar collection for an exposition on fermentation.

Cacáo seeds can be fermented by pulp from inside its pod in what Volker declares “chaos interactive” whereby the forces of pH battle it out. By the end bacteria wins & yeasts die. Flavor precursors realized during this crucial stage largely impart the majority of a chocolate’s potential end-flavor.

Fermentation techniques include the old pile method, typically with a banana leaf or palm frond placed on top to contain heat; the more standard cascading “sweat” boxes; & a spin-off variant of that in barrel boxes.

Tray Fermentation sounds novel but Volker freely credits Rohan’s system from the 1950s which he has updated & re-designed. 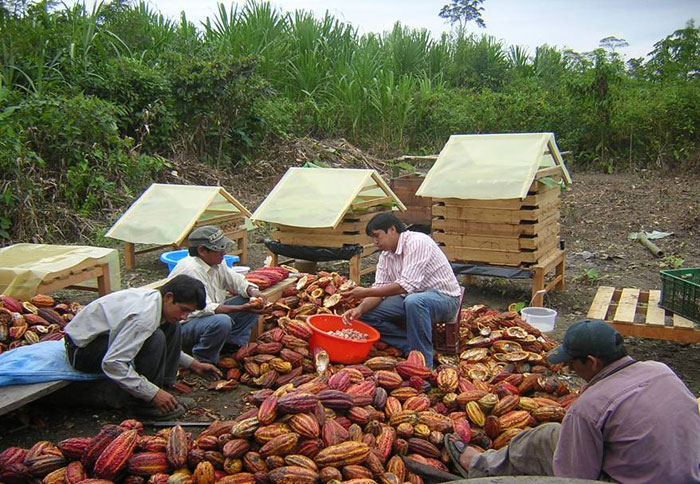 Without getting into all the nuances as to what degree this contributes to that nebulous of concepts called terroir -- encompassing the milieu, the genetics, the post-harvest... the je ne sais quoi details right down to inoculum & bacterium & perchance a nearby sneeze caught on the wind -- the question becomes how far to extend the notion?

Because of their fat content, cocoa beans are quite absorbent of whatever happens to be hanging around. Should that include diesel, drilled & refined in Venezuela, puffing out passing vehicles as beans are laid out to dry in Bolivia? Jute sacks woven in Paraguay in which they’re packed? The Panamanian cargo hull that transports them to Northern consumers? The hands of Australian chocolate manufacturers (do they use a sanitizer or wear latex gloves in the handling)? Or the very material in which the finished chocolate is wrapped (hi-tech plastic, lo-tech paper, aluminum foil)?

Cocoa is, after all, a global trading good. Every step in its long production chain can, according to the terroirists, shape flavor however minute.

This bar fermented in small trays instead of bigger boxes might be construed as a demonstration of anti-terroir since it, arguably, utilizes less of its surrounding environs (or is it more? Less wood / more air?) on a cacáo type hybridized with seedlings imported from elsewhere.

With that premise, considerations shift to how it stacks up against its fraternal twin – Zokoko’s 68% Alto Bení Box Ferment.

Both methods attain a comparable peak temperature but the heating curve between them differs. Boxes take longer to heat up since they start slower. Consequently, trays reduce treatment time from about 8 days down to 6 which factors into why most consider them easier to work with & less labor-intensive.

The strength of the Box method imparts all those wooden effects despite the wood supposedly being sealed in the process of fermenting over many harvests. Similar transference has dramatically colored Moho’s bars (fka Cotton Tree) employing sapodilla wood & Corallo iroko.

The Trays perform better in converting the sweetness toward more core chocolate flavor. It shows lighter on the palate, smoother flavor / softer finish, far less persistence in the aft-taste. Oddly, in an unexpected twist, it also reduces -- though by no means eliminates -- the perception of sugar.

Maybe the Trays’ greater aeration / oxidation help to create all that?

In any event, side-by-side comparisons amount to more of an exposé than a mere vanity. What can be drawn from this study is that each little step in the grand transformation of cacáo seed to cocoa bean to chocolate bar is as vital as the next & why it easily surpasses other specialties (wine, coffee, scotch, cigars) in the realm of elaborations.