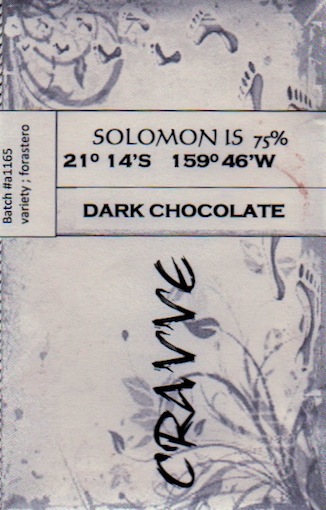 Impact
Another first: the premiere of a single-origin chocolate sourced from Solomon Islands to be so recognized anywhere.

So far off-the-grid that few have even heard of it.

Several well-placed calls to insiders at CIRAD in France, USDA, Mars & Hershey's -- all geneticists who make it their business to track down cacáo everywhere it grows on the planet -- & they are all startled. Solomon Islands? (Which may be more a comment on the industry than the islands.)

What about the great reference guides & books on the species? From Bartley's The Genetic Diversity of Cacao & Its Utilization to the German Cocoa & Chocolate Foundation (a very resourceful atlas) & the exhaustive Chocolate: History, Culture, & Heritage edited by Grivetti & Shapiro? Nothing.

Enough of a black hole surrounds Solomon Island cacáo to wonder whether they still exist or did the US Military vaporize them during nuclear blast tests.

Well, a cold call to the Agricultural Ministry there reports that Solomon actually produces more cocoa than its neighbors in the South Pacific (Vanuatu, Fiji, Samoa, et.al). Those enjoy better distribution however & hence better known.

In fact, Solomon Islands ranks as the largest Pacific island producer at ~7,000MT thanks to 20,000 stakeholder families who cultivate it. The main local processor & exporter -- C-Corp Ltd. (hmmm, sounds strangely familiar to a chocolate review website) – steps in & handles most of it from there.

Thru their combined efforts, cacáo represents the 3rd most important export earner for Solomon Islands, right behind logging & palm oil.

Much of the commercial crop stems from material planted in the 1980s with newer, more recent types entering from PNG. This follows a similar pattern to Australia. And for good reason. Australia is both a major export market for Solomon Island cocoa (the other is Singapore) as well as underwriter of the cocoa sector’s improvements thru AusAID.

So, now, without any further gnashing of the teeth or wagging of the tongue over 'how does it taste', here's the first ever review of premium chocolate from Solomon Islands.
Appearance   3.3 / 5

Often an exotic origin proves more exciting in name than in flavor. Solomon Island excites on both accounts & multiple levels beyond.

Those naturally-occuring milk chocolate overtones in this bar rival Catongo & select seeds from Marañón Canyon -- the lactic acid converted beautifully in the ferment.

So benign for a 75% which, depending on how Cravve calculates its cacáo-conent, may actually weigh closer to 80% to surpass even ki'Xocolatl's supersweet 72% chocolate kiddie pool. Extra cocoa butter here spells the difference in a soft textural pad too, which contributes to the overall enveloping sensation.

A fine-grade chocolate; nothing that bludgeons taste buds, just soothes them over with smooth flavor. Someone needs to conduct a survey of this place.