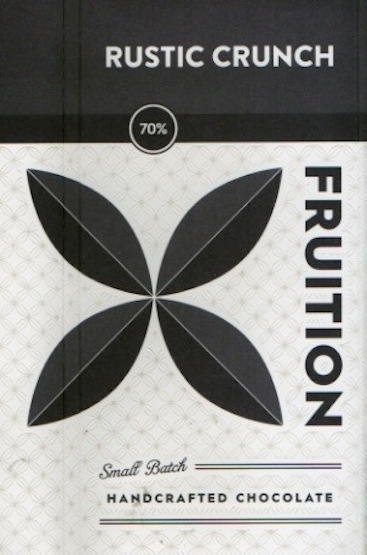 Ultimately harmless seeing how Fruition turns down the cauldron, reduces the Maillard Reactions, & practically shuts the power off on the grinder prior to plunging zombie-skeletons without skulls into chocolate euphoria. Even they somehow manage to bite down & lick it all up.
Appearance   4.6 / 5

the look of fruition in deep stellar space

Terrific distribution of Nibs. Some bars just toss 'em in haphazardly. Fruition ensures that they disseminate evenly. This creates incredible consistency in the Texture for a Nibs-Chocolate Combine, partially attributable to an overall coarse grind by Fruition standards which aligns better because of it. Hence, the reason for the green / raw cocoa tags too.

Both the cinnamon & vanilla additives amount to near traces rather than pronounced flavorings. Together with the other components they all galvanize perfumes that otherwise would never register; certainly beyond what Tumbes cacáo offers on its own (see Barsmiths™ or French Broad's version).

Fruition clearly on a roll.

Aged for 3 months in bourbon barrels to recall similar experiments by Raaka and Soma. Those worked off of pedigreed seeds; this enhances & elevates humble stock.

Tastes of added flavor rather than just ingrained influences. Hardly any Milk Chocolate handles here at all; that's how amalgamated Fruition makes it. Some may demur such, as well as the exuberant character of the barrel aging, especially the cherry-almond reduction, in a case of 'too good'. Drop it down a month & maybe this distills ever more rarefied.

As is, deserves a spot in the pantheon of the gods' dessert trolley alongside Corallo's Grand Kru.