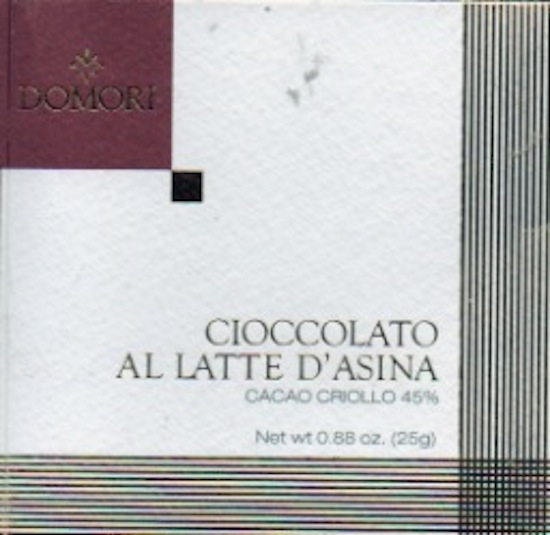 Impact
Jesus rode a donkey into Jerusalem & washed the feet of servants.

Domori, evermore so humble: after reaching the stratos-heights of chocolate – launching one stellar bar after another – he doesn’t mount but instead milks an ass in order to bath palates of the poor 'n anonymous as well as the rich 'n famous for, even at these prices, this amounts to an affordable luxury for all.

Yes, ass milk. Cleopatra & other fine women bathed & cleansed their faces in it. Supposedly endowed with as many healing properties as… well, as chocolate. Close to mother’s milk.

Mirrors Domori Javagrey in intensity plus proportions & then the twain diverge.

Recovers for quite the rally by the final trimester, some near-though-not-quite traditional Milk Chocolate tags (caramel / toffee / tootsie roll) that stand apart & unique largely on account of the donkey variety of milk.

Compared to cow's milk, donkeys produce a milk of less protein (quite evident in the overall lighter countenance to the flavor) & less fat (inexplicable considering the wads of gum / wax until examining the formulation) which nets greater lactose. And by the end, that very sweet lactose -- a disaccharide sugar -- contributes a nectar-like quality requiring patience to allow the melt thru.

Domori configures this at 45% cacáo-content, 22.5% donkey milk & the rest (roughly one-third) sugar. But that strikes as a bit misleading. The second ingredient, after the sugar but before the donkey milk, lists cocoa butter. Do the math & that means at least a quarter of this bar contains added cocoa butter in addition to the lipids intrinsic to the cocoa mass (approximately half of cocoa mass or another 10% to this bar) for a grand total of a minimum 35% butter. Not to mention donkey milk's own fat content.

This for an extremely delicate cultivar of Criollo feels just obese & the flavor merely fulsome.

But in a testament of their combined fortitude, cacáo & donkey conspire to outlast all else for a satisfying climax.