Epoch or apocryphal… very crafty to state the least.
Appearance   4.8 / 5 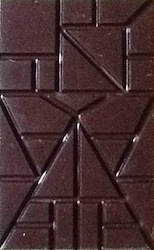 Release 1
Tremendous tolerance for an 88%.

Some truly innovative techniques / enhancements at every step of the processing chain interplay together. And unlike a few furtive souls in this niche, Middlebury transparently advertises it. Straight up it tells fans about roasting cacáo seeds over a fruitwoods fire, then mellowed in ash for 2 weeks before grinding at low temps an additional 10 to 12 days (!?!?!?!?!). Meanwhile, its in-house pressed cocoa-butter utilized in this bar hovers & absorbs cedar & vanilla vapors. All this time curing, thus the Epoch title.

Each one of these steps practically takes turns in tagging the taste-buds with their gastronomic imprint, including, in an unobtrusive manner, the maple sugar utilized instead of the typical cane sugar to render this a real taste of New England from where Middlebury operates.

On the downside, Patanemo itself gets lost in the mix. Its intrinsic fruits, flowers & nuts all but effaced except as perfumes in the Aroma. Which all underscores cacáo's malleable properties beyond its obvious Textural ones. Not quite a blank canvas but a well for absorbing external inputs to internalize then project back out.

Some scarring occurs to Patanemo's DNA (rubber 'n tar, for instance, an off-trait). That misses the point however. Middlebury constructs a meta-chocolate here above & beyond an origin's terroir. It superimposes a maker's mark in a sort of appellation d'artisan contrôlée in order to direct an outcome otherwise unobtainable. This portends good & ill depending on POV & the skill set involved. Nothing new, in a sense, since chocolate manipulation goes back centuries with recent updates including tray fermentation, starter cultures, spiked piles, cask aging & more. No one, however, takes it to this crafted degree. Huge marks for creativity & experimentation.

A seed first gleaned with Nova Mondo's release, then again in French Broad's sweeter (68%) bar. Fairly monodimensional other than that lilac intrigue (which the barsmith interprets as prune). Incredibly reposed for 76% though. Simple as a carbon diamond.

All the elaboration of Middlebury Chocolate's processing less obvious in this bar. For starters, cane swaps out maple sugar. Additionally, this cacáo type sits up straight to begin with & being more stout absorbs the wood-firing to an almost intrinsic degree. In a word, compatible. Finally, Stephanie & Andrew Jackson upped their game further (in this exemplar: smoked over maple+fruitwood / aged in ash for 12 days / refined at 110ºF for 8 days / conched for a couple more at 138ºF / then aged some more in oak… all other barsmiths should thank them for the overshare).

Students at the local Middlebury College can just bite this & pop a marshmallow to recreate a cup of hot cocoa during the deep-freeze of Vermont winters inside their campus bubble of what amounts to a cow pasture with all dairy farms surrounding it.