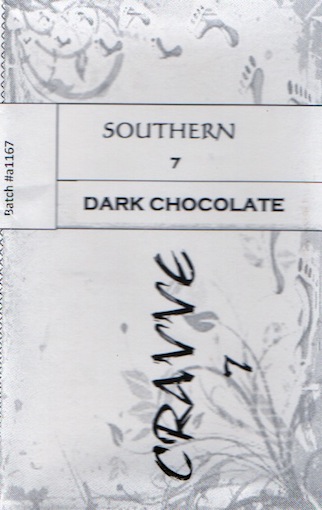 Impact
WARNING: too many bites might trigger The Stimulizer – an app that can detect which fully-clad guys walk the street with an erection, or women all moist on the insides.
Appearance   3.5 / 5

Hits a lot of glam spots in this single bar tour of cacáo origins. Just about all of ‘em except The D.R.

7 in total (hence the name): Australia, Fiji, Madagascar, Papua New Guinea, Samoa, Tanzania, Venezuela. As Peter Mengler of Cravve explains: "individually roasted / conched & then blended. I believe in roasting each separately. I'm not a fan of mixing the beans then roasting as is a common practice."

Somewhat equalized all the same... due less to a considerable roast (which Cravve tends to apply tepidly) & more a function of a formulation that tilts in favor of the lighter benign cacáos in this blend... to negate many distinctions.

Venezuela takes front stage for the most part in this super-blend, & Samoa has the final say with that finespun peppery mint for a parting-shot. In between, the bar gently rolls while staying predominantly on a straight course.

Despite the geographic sprawl represented in this -- a mini U.N. -- still nowhere near the range of others in the high-bean count class: Amedei's 9, Guanaja by Valrhona or the Guittard Complexité. Instead this pretty much goes on a canceling spree of sorts, ala highly pedigreed, albeit delimited, works of Felchlin's Centenario & the Domori Il 100.

Which all points to the fact that however good, such as it is (c'mon now, from where else can such pure baseline chocolate flavor be found?), the art of blending (yes, if shaving can rise to the level of art, then so too chocolate) constitutes a specialty all its own that few bother with, let alone master.

Ultimately, Cravve Southern 7 parallels Bernachon's blends -- both for its calculation of cacáo-content based on cocoa mass only & for its generally plain center-point chocolate, though too sublime here to call 'simple' -- but without the Frenchman's heavy vanilla smear; relying strictly on the cacáo nuts themselves. So meticulously selected for natural sweetness that it hardly needs sugar. In that respect, this surmounts even as it never quite reaches the depth of Bernachon for that would just distract from the overarching smooth evenness & serene dignity.

As such, this embodies more of an Eastern temperament than a hot-blooded Southern one.