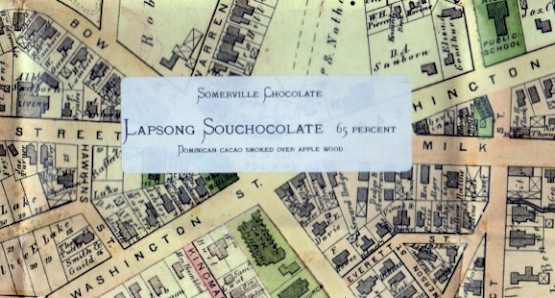 Years ago the C-spot® stated that where every town once had a baker, a butcher, & a candlestick maker will soon have an artisan baker, boutique butcher, & a premium chocolate maker. If it keeps apace at this rate, it might even be on every corner.

Current Exhibit: Somerville, Massachusetts -- a small subdivision of metropolitan Boston. Also home to Taza, this community adds a second barsmith to its neighborhood, one exuding a neo-European approach (refined without any extra cocoa butter or lecithin) compared to the Old School / retro-American leanings of Taza.

Speaking to this seemingly unstoppable chocolate proliferation, a cocoa guru decried the hundreds upon hundreds breaking into the burgeoning scene, estimating that only a handful are any good; almost akin to those critics who write that there hasn't been any good music since that prefab boy band The Sex Pistols. Another discourses about curation as though chocolate is some static museum piece locked behind glass-enclosed displays when just the opposite occurs: a bar's melt all but guarantees dynamic action.

Chocolate’s a direct hit; it's easy to 'get it'. Humans need potty training in it like the world needs another war. Mere exposure to these barsmithing labs of chocolate experiments sprouting up all over map & the marketplace via digital media will sift thru the results.

As for Somerville Chocolate, just as the C-spot® Daily Review first heralded Fruition, Lonohana, Brasstown (fka it’s chocolate), Rózsavölgyi, Minimal… among a slew of others… this company stands poised to make its imprint.

Residents of Somerville, MA now have a real choice.
Appearance   3.6 / 5

White
rare for the category… a bit of a deciduous forest… ahh, & for a good cause / reason...
Mouthfeel   12.2 / 15
Flavor   45.9 / 50
NIcaragua
aligns to the Aromamatics with a very blackstrap molasses of course +, naturally, black walnut husk -> late-breaking tobacco -> inexplicable white sapote -> black cocoa in the aft-draft

Hawaiian
70% cacáo-content
Another simplex but of tremendous depth & savor. Hawaiian cacáo often inheres with a fruit inlay. This stays pretty even to a cocoa baseline. A dark Dark without roaming into bitter brut territory. Along with the Nicaragua (above), these 2 bars make for compatible companions of hi-CQ (for Chocolate Quotient) fitting the Naked Flavor Profile.
INGREDIENTS: cocoa mass, sugar

White
Ever since Askinosie and Danta introduced White Chocolate with Nibs, this combo just keeps on killing it. Somerville sensationalizes it further by omitting vanilla (addition via subtraction). Outstanding gastronomics.