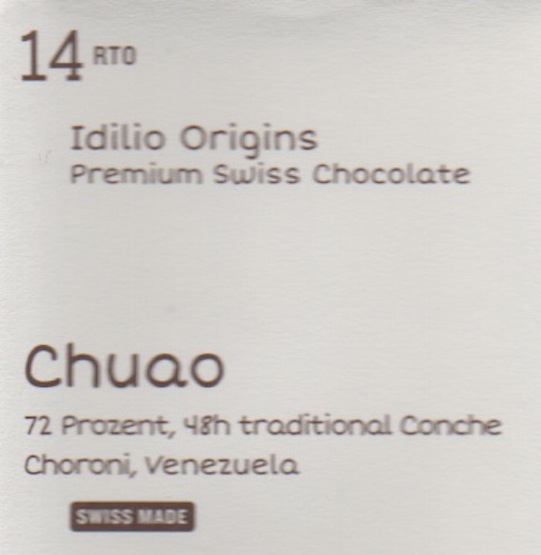 Impact
A bar crafted in Switzerland, the home of Idilio &, at one time, William Tell. He was the 14th century marksman famous for taking down tyrants.

According to the legend, the governor of Tell's Swiss canton hung his hat on a stake & ordered all the townsfolk to bow to it whenever they passed. Tell refused.

The governor then ordered him to shoot an apple off Tell's own son's head with a crossbow as punishment. He succeeded & would later escape imprisonment to kill the governor, an event that then led a rebellion & the formation of a Swiss Confederacy.

Never really turns the big, bold fruits so endemic to its reputation.

So unconventional to suggest a very specific seed lot (such as Bonnat's Village Chuao). Or perhaps even tangential / proximate to the peninsula (though nowhere as far off as Domori Chuao). But with the deteriorating situation in Venezuela, one South American chocolate agent hears reports of Euro companies buying Venezuelan cocoa on the Colombian border at a deep discount. Who knows what representations are proffered in this pop-up spot market.

These latter instances seem unlikely given that Klaus Blumer of Idilio tacks an inside track in the country after marrying a daughter of Venezuela.

Still, laden with quality, as well as cocoa butter (a bulbous CBS (Cocoa mass / Butter / Sugar ratio) of ~5:9:5 which stunts the profile some to recall Bonnat's other Chuao). Excellent, such as it is.

Idilio's own liner notes prove quite instructive (excepting the listed "pineapple" & "lime" which are almost never inflected in Venezuela, & especially with respect to cacáo from its the coastal redoubts, other than the weirdly fermented Mast Bros bars 81%, 76% & 70%; ergo the softer / lighter cherimoya & starfruit above).

Felchlin, the manufacturer, performs its usual medium-hi roast but wisely conches down to only 48 hours rather than its traditional 60+ hours which would've blanked an already mild chocolate into an utterly bland one.