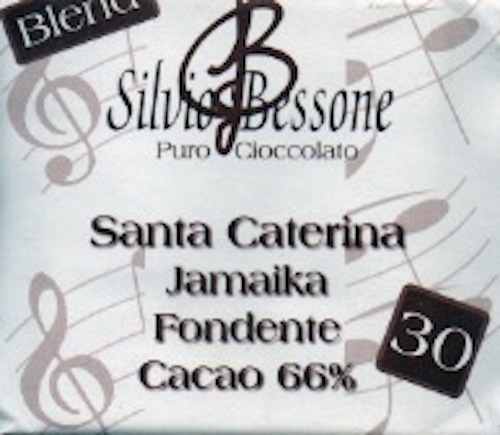 Impact
Silvio Bessone likens each of these bars to a pitch-note in the diatonic musical scale using solfège (Do-Re-Me-Fa-Sol-La-Si-Do) in a case of acoustic-olfactory synesthesia.

But, some cocoa-gurus sing, one bar alone of any good chocolate supposedly scores an entire "symphony of flavors".

Hmmm, cacáo in ancient Mesoamerica served during high-social occasions featured a performance aspect with drinking vessels & pots smashed against walls, Jimi Hendrix-style, to heighten the drama of the evening.

Forget symphonics, how about blending all these bars together in a single supermix mash-up. Operatic.

The way this maestro conducts chocolate, Bessone can pull it off.
Appearance   4 / 5

Santa Caterina
another huge chocolate swell to start plus, confirming the Aroma, a Milk Chocolate slant complete with vanilla, caramel, cream, etc. -> forwards a subliminal flower… call it the blue buds of Lignum Vitae (the nat’l flower of Jamaica) -> banana like Arawak (above) -> a drop of carob in a short-shot of sweet rum -> trace sweetsop

Dagò, Costa d'Avorio
coconut oil -> butter
Quality   18.3 / 20
Grand Pajaten Varzea del Rio Abisea
66% cacáo-content; Amazon
From San Martin, the capital of CCN in Peru. This however, hails from the wilderness of the Rio Abiseo Nat'l Park, off to the side & out of the way from the industrial breeders.
Twee sweet yet excellent; core chocolate simply seasoned with vanilla. Incredibly generous, just keeps on giving with succulence.
INGREDIENTS: cocoa mass, sugar, cocoa butter, lecithin, vanilla

Calceta "Quinche"
66% cacáo-content; Ecuador; EET x probable CCN-51
Named to honor the hub of Manabì Province in Ecuador & the people who live in the environs.
OK, such as it is… plain, basic chocolate campfire fare. Nothing to trek "upriver" for; or, as the Nacional legend goes, "Arriba".
INGREDIENTS: cocoa mass, sugar, cocoa butter, salt

Sur de Maracaibo
66% cacáo-content; Venezuela
Sur del Lago and Maracaibo strangely sit splintered in the world of cacáo as semi-autonomous varietals when indeed they both share a generally common area. Bessone conjoins them here -- in name only: no mistaking the profile identifies this as decidedly Maracaibo.
As ever with Maracaibo, an easy pleasure made all the more sumptuous by the cocoa butter pad & extra sugar.
INGREDIENTS: cocoa mass, sugar, cocoa butter, salt

Venezuela Latte Cacao
45% cacáo-content
Such a natural combo with dairy; as though the Sud de Maracaibo (above) decided to attend a swingers party -- with & by itself.
Cacáo spots like Java, Belize &, to a lesser degree, Esmeraldas furnish phenomenal Milk Chocolate bases because of contrastive flavor points while Maracaibo achieves as much thru complementarity, proved initially by Felchlin & re-confirmed here by Bessone.
Heavy cream & cocoa butter (Italians have a penchant for that). Ergo, a bit of a "white"-out, in the best way though.
Bessone waxes on about how cocoa butter extracted from the same seeds as the cocoa mass renders a "soft & delicate scent of ripe fruit & flowers'. Hmmm, tougher to pick those up in cocoa butter alone.
In any event, shine thru they do -- however momentarily.
And what a textural load: voluptuous engorgement.
INGREDIENTS: cocoa mass, sugar, cocoa butter, milk powder, salt, lecithin, vanilla

Santa Caterina
66% cacáo-content; Jamaica
An all-too-rare Jamaican hardly glimpsed on the premium scene -- just a over a dozen or so entered in The Chocolate Census.
This one spans the spectrum from an intense chocolate attack to that super-subtle notch of florals & the begging sweetness at the tail.
A bar that vibes off the island's culture.
INGREDIENTS: cocoa mass, sugar, cocoa butter, salt

Dagò, Costa d'Avorio
66% cacáo-content; Ivory Coast
Been thru this before. Timid / shallow.
Dubious selection criteria hampers Ivory Coast. And this from a Bessone-quality barsmith! Imagine what the country tosses on the bulk-grade commodity market.
West Africa, once the tall timber of core classic Earth cocoa, now cut-down & pussified, the breeding ground for corporate programs promising both productivity & "fine flavor".
Exemplar for the oxymoron 'strong hints' of, in this case, cioccolatosi (an acceptable translation of a banned word -- "chocolatey" -- because… well, Italian just sings) because in reality none exists, at least in this bar.
That aside, perfectly suitable for cupcake frosting. Clueless chefs shall rave about it on food shows.
INGREDIENTS: cocoa mass, sugar, cocoa butter, salt

Capsule Summary
Hi-end collection. Uniformly very good to excellent. No misfires. Big concentrates of flavor.
Salt utilized to strategic effect, just to lift the interiors & extrovert them.
The gaps between a few of these origin-bars relatively narrower than their genetic and geographic distance let on, leading some to believe they're undifferentiated.
Shut out distractions, make a mental map & let the mind-melt be the guide.