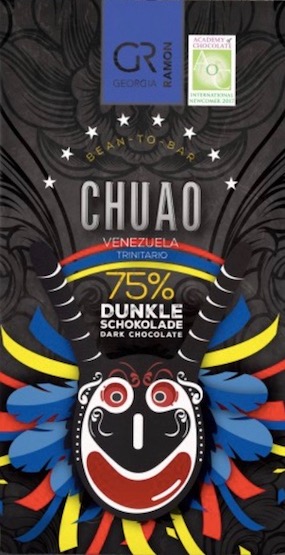 Yeah, with Eloi (re: “elites”) like these, extinction is a foregone conclusion. The question is simply when the 'super class' starts going underground & turning into Morlocks. Singularity Moment? Oh, they already have!

Take heart y’all… for the world according to Georgia-Ramon: flavorful indeed.

Up-roasted & vigorously processed judging by taste & texture, the latter ultra-smooth / even but ponderous as though over-battered. This being Chuao, it can take it! And, better yet, still give back.

Ground to a fine granular texture for 72 hours then moulded & set without any conche time. Phenomenal steadiness & stamina. Constant throughout save for minor flavor detailing / offsets along the progression. A sound batch from the good growers at Cooperative Fedecovera Q'eqchi Mayas.

So honest in formulation & delivery. The basic battery + whole milk (no vanilla). Genuine. Understated for a 62% Dark-Milk, supple in its cream-folds. Superb.

Faithful to the proud heritage of Soconusco & the likes of other great chocolate -- exemplified in the modern era by Bonnat -- made from this historic cacáo grove over which an empire went to war. Incredibly round, both in flavor & feel. So benign for 76%, or any percent. Greatness re-affirmed. Georgia-Ramon, a gastro-justice warrior!

Jamaica, miss ya. So neglected all these years by most barsmiths. Shame. Kind & gentle but with backbone. These cocoa pulled from a handful of districts treated to a central fermentation that includes a modern update on foot-polishing of yore -- re: machine buffed. Nice. Call it Spa Chocolate. Taste the relaxation, the serenity.

Flavor stasis, hits & sticks its taste point & that's it, largely (entirely?) attributable to date-sugar as the sweetener instead of cane sugar. The result: profile rests on the sweetening agent laying into the cocoa origin which, here, is effaced, suffocated & buried. A rare miss for G-R but an 'A' in this Buddhist era of 'mindfulness' for Aspirational intent.

Unusual to say the least & state the obvious. Schattenmilch translates from German into 'Shadow Milk'. This the same cacáo as the Dominikanische Republik (above) except unsweetened (save for milk lactose sugars). A formulation similar to Santander's Mayan Dark.
Shadowy indeed. Never alights whatsoever. Brooding thru & thru.
Perfect for listening to DRE Beats with some sad-rap on, mulling over anxiety, depression, ennui.

The 3rd in this D.R. trio (Dominikanische Republik and Schattenmilch above). Coffee really wakes up the bar & the origin. Wall-to-wall. As noted many times on this site, cacáo / cocoa / chocolate is potent but fragile. 9% coffee berries herein -- while just a fraction at roughly .1 (one-tenth) the entire recipe -- just annihilates the substrata. It chokes cocoa off. Typically any amount over 5% adds up to overkill. Then again, G-R aptly forewarns by calling it Espresso so it lives up to its billing. Still, G-R might consider the Jamaica Blue Mt it had a hand in during a prior chocolate incarnation at Coppeneur & tweak the blueprint here.
That aside, for those who wish to skip their morning cup, this serves as a very suitable substitute.

A tremendous MC (Milk Chocolate). A bit simple & simply great. No let ups or let downs; none; absolute zero. Succulent, generous, & fulsome in flavor & body. Haitian cacáo the last few years has come on strong & this reaffirms as much.

A single-origin White in the grand tradition of Venezuelan Icoa or Conacado White from the D.R.. Plus, replete with Cocoa Nibs to harken Askinosie's seminal configuration for the ultimate in a chocolate bi-polar joint order.
G-R executes to near perfection. Hardly a wobble; just a crunch (from the Nibs) & mite caustic tag at the early frame (from the dairy).
5-Star material.

Nothing complex. Direct & to the point. G-R soft pedals the goat milk which can dominate a chocolate if unrestrained. Here only 15% of the entire formula comprises goat milk, further assuaged by the mild Saanen breed of them from renowned Dutch farms. In addition, G-R surrounds it with copious cocoa butter (far more than cocoa mass). The total gestalt barely tastes of goat at all which, again, can be quite strong & overbearing. Assiduous sourcing & implementation make for a fab Milk Chocolate -- goat, cow, sheep, horse, camel or otherwise.

Chanterelle in the guise of a fruit-spice so well-matched to the underlying cocoa that G-R achieves virtually seamless integration. Masterful.

Kürbis & Curry
opens on curry, warm & inviting, then sweetened in pumpkin -> texture turns pulp on the White Chocolate base -> yam

Bizarrely remarkable. A bevy of pumpkin pie spices buoy the curry into a sweet 'n savory dimension. Creative innovation. Only from G-R. Successful experiments like this more than compensate for the occasional miss. Put it on the bucket list of the unusual but necessary.

Erdbeere & Joghurt
strawberry gradually bites into milk, then cream & finally the light twang of yoghurt, very cooling as strawberry ice-cream -> elements mesh up a citrus tang along the lines of tart raspberries

Haselnüsse & Limette -- surprise pair... White Chocolate-covered hazelnuts doused in limes; whodathunk but G-R because somehow they either knew or mastered it to work; shockingly good, citrus really wakes up the mates

Mandeln & Chili -- 70% cocoa-dusted almonds with enough intrinsic fat onboard to quell a slow building chili pepper heat, certainly felt more than tasted & even then nowhere near a burn; consider it an in-chamber roast

62%
No, cocoa-fiend, not 62% cocoa-content but 62% Hazelnut in this Haselnuss Creme Gianduja (the remainder: 27% sugar / 11% cocoa powder). Any parallels to Nutella insult the very container of this spread let alone the Gianduja inside it. Yes, the consistency of cream, so much flow, even more so flavor. Rich beyond expectations. This lifts the day; & night too. Drug-like in its side-effects of an elixir-cum-ambrosia. Goes with EVERYTHING. Even better by itself.
Quality   18.2 / 20
Chocolate imagination.

Yeah, G-R grinds with the best of the purists when it comes to single origin bars -- the gold standard of premium craft. This label separates from the pack, however, with daring Flavored combos. In league with only a handful of creatives in this regard -- Pump Street, Naive &, of course, Zotter among others.